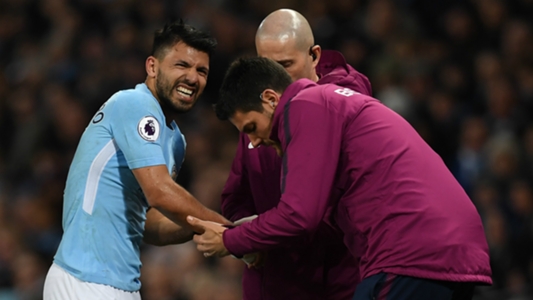 Manchester City striker Sergio Aguero is out of Monday’s game at Stoke City after picking up a knee injury in training, he has confirmed.

The striker sustained the problem during City’s final session ahead of the game at bet365 Stadium.

City medical staff have carried out further tests and informed Aguero that he will return in around two weeks.

The Blues have a sparse fixture list in the coming weeks despite the fact they are gunning to clinch the league title in record time and are preparing for the Champions League quarter-finals.

City do not have a game next weekend as their scheduled opponents, Brighton, are in FA Cup action, while international fixtures are slated for the following weekend.

Given the gap between City’s next two matches the squad will fly to Abu Dhabi following the game against Stoke on Monday for a warm weather training break.

Aguero will, however, be hoping to be fit for Argentina’s friendlies against Italy – to be held at City’s Etihad Stadium – and Spain on March 23 and 27.

City will be back in action at Goodison Park on March 31, before facing Manchester United at the Etihad on April 7.

During yesterday’s training I had a discomfort on my left knee. The club’s doctors told me I’ll be back with the team in approximately two weeks. Now it’s time for a full recovery!
— Sergio Kun Aguero (@aguerosergiokun) March 11, 2018

As well as a forgiving fixture schedule in the coming weeks, any potential Aguero injury blow would be further softened by the return to fitness of Gabriel Jesus, who started his first game in over two months against Basel in midweek and marked his comeback with a goal.