As Manchester City’s hectic transfer window sped along last summer, rumours circulated that yet another top-secret signing was jetting into the club’s City Football Academy base.

Having kept a major deal for Bernardo Silva under wraps until the very last minute, it appeared City had done it again. The Twitter user who had initially suggested Silva was on a flight to Manchester had piped up for a second time; another new player was on his way.

Sources at the CFA confirmed that something was afoot, and during a summer in which City chased Alexis Sanchez, Kylian Mbappe, Dani Alves and several secretive centre-back options, the online rumour mill went into overdrive.

A new player did arrive at City that day, a centre-back in fact, and he was flanked by illustrious duo Ivan De La Pena and Carles Puyol. But as the hours went by the fever died down, and the hype petered out. There was no photoshoot, no announcement, no fanfare.

There never is when youngsters are signed, no matter how good they are. And this one was a very good one. Despite chasing nine reinforcements for the first team, City ensured they did not miss out on one of the jewels of Barcelona’s La Masia academy.

It was 16-year-old Eric Garcia. The centre-back had been at Barca since he was seven years old, captaining every youth team he had been in, despite playing in older age groups. Barca fans and beat journalists bemoaned his departure, holding it up as further proof of the mismanagement that has beset the famous club in recent years.

Barca themselves were so unhappy with Puyol’s role in the move, and the other implications of his being an agent, that the former defender recently called time on his new career altogether.

Garcia’s arrival in Manchester barely made a splash, however; City simply had bigger fish to fry and the pursuit of some of the world’s most established stars went on.

Yet just a year down the line Garcia is beginning to stand out. In fact he has already had some impact on Pep Guardiola’s transfer plans for the final two weeks of the current window.

Having missed out on Jorginho, Guardiola does not want to bring in a midfielder who could well prove useful this season, but may not fit in the longer term. If the right man does not appear in the coming days the Catalan is happy to use Fernandinho, Fabian Delph and, as a back-up, Oleksandar Zinchenko as his ‘pivot’ next season.

And sources close to Guardiola also stress that he believes Garcia, still four months from his 18th birthday, could also be used there in the future.

It has clearly been quite a year for the youngster. 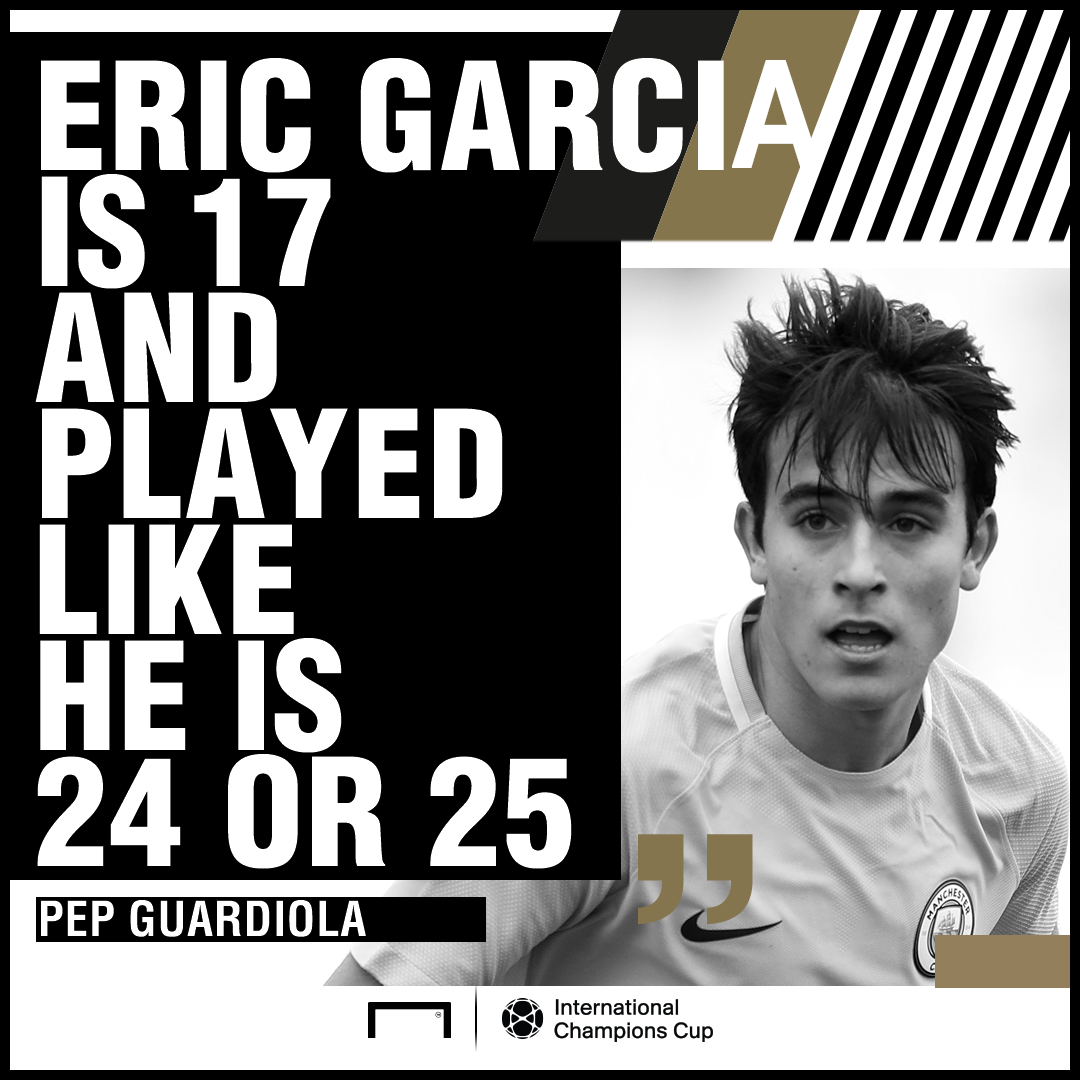 Guardiola, despite his Barca connections, had not known much of Garcia while the youngster was breaking through at La Masia, but in the past 12 months the City boss has become a serious admirer.

With essentially all of the senior side recovering from the World Cup, City’s pre-season line-ups have looked more like one of their Elite Development Squads than the team that just won the title with 100 points.

There has not been much to cheer about from defeats against Borussia Dortmund and Liverpool but it is fair to say that Garcia has been the stand-out performer in both games, a feat more impressive when you consider his age.

For the Liverpool clash Guardiola stationed the youngster in the middle of a back three, a role that comes with great responsibility.

“John [Stones] has a specific quality to squeeze our game,” Guardiola said last August, explaining why Stones played in the middle of a three-man defence. “His reading is so good, to be high, to read the intentions of the opponents. The first step, the first pass, John is better than the other ones.”

It is clear by now that Guardiola needs his defenders to be more than comfortable on the ball and in that respect Garcia is perfect. In his two senior outings this summer he has displayed a fine range of passing, not just playing the ball into midfield or up to the forwards as Stones and others have become accustomed to, but switching the play to the flanks.

That is to be expected for somebody who has been brought through at Barca, and of course the youngster understands the principles of Guardiola’s gameplan – remember that it takes many senior players several months to get it, if they get it at all.

But Garcia has also worked hard on the other aspects of defending since arriving in Manchester; he has felt a need to work on his physicality, given the profile of forwards and direct style of football he is now facing, and the fact that he is under six feet tall. 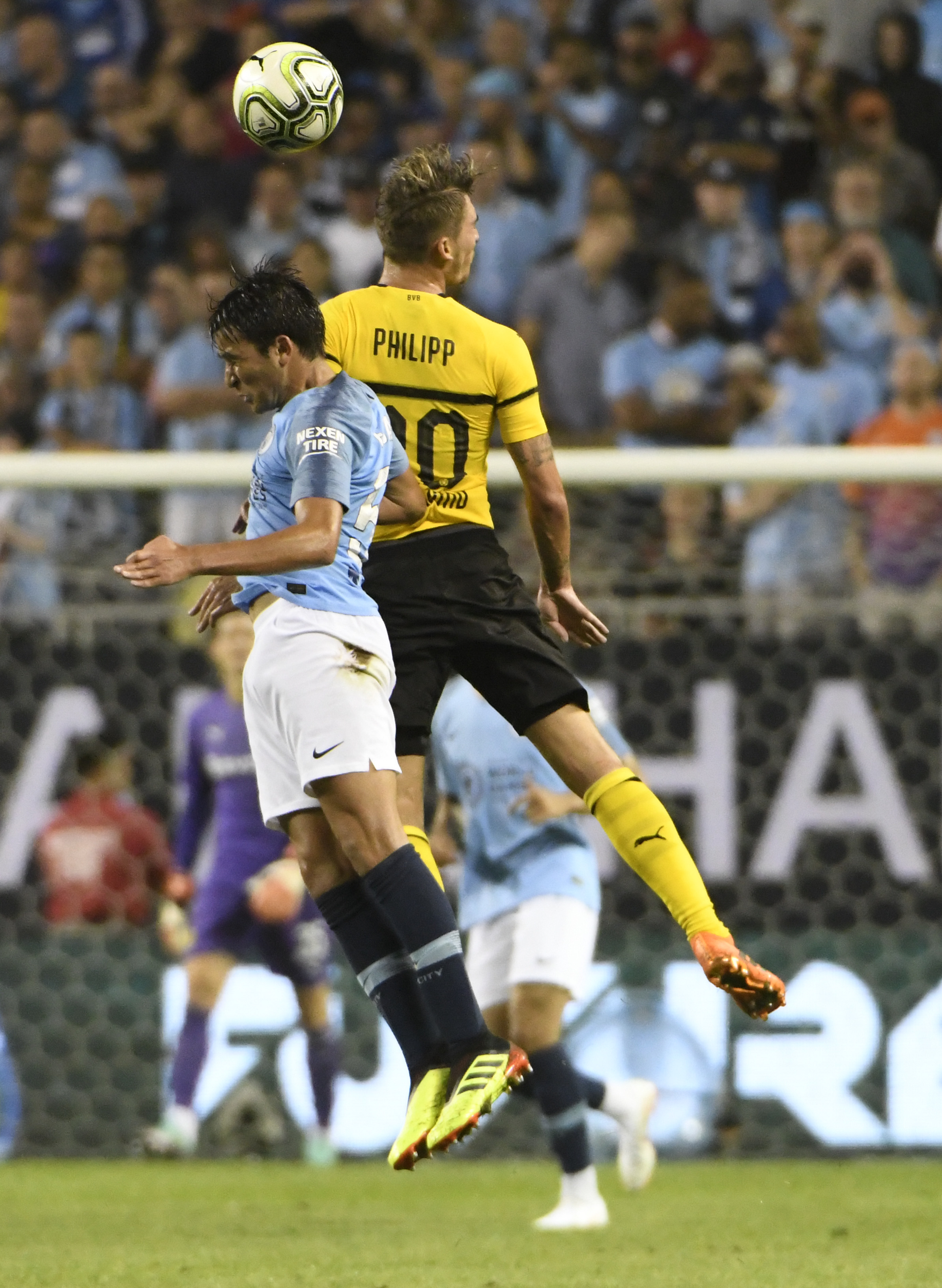 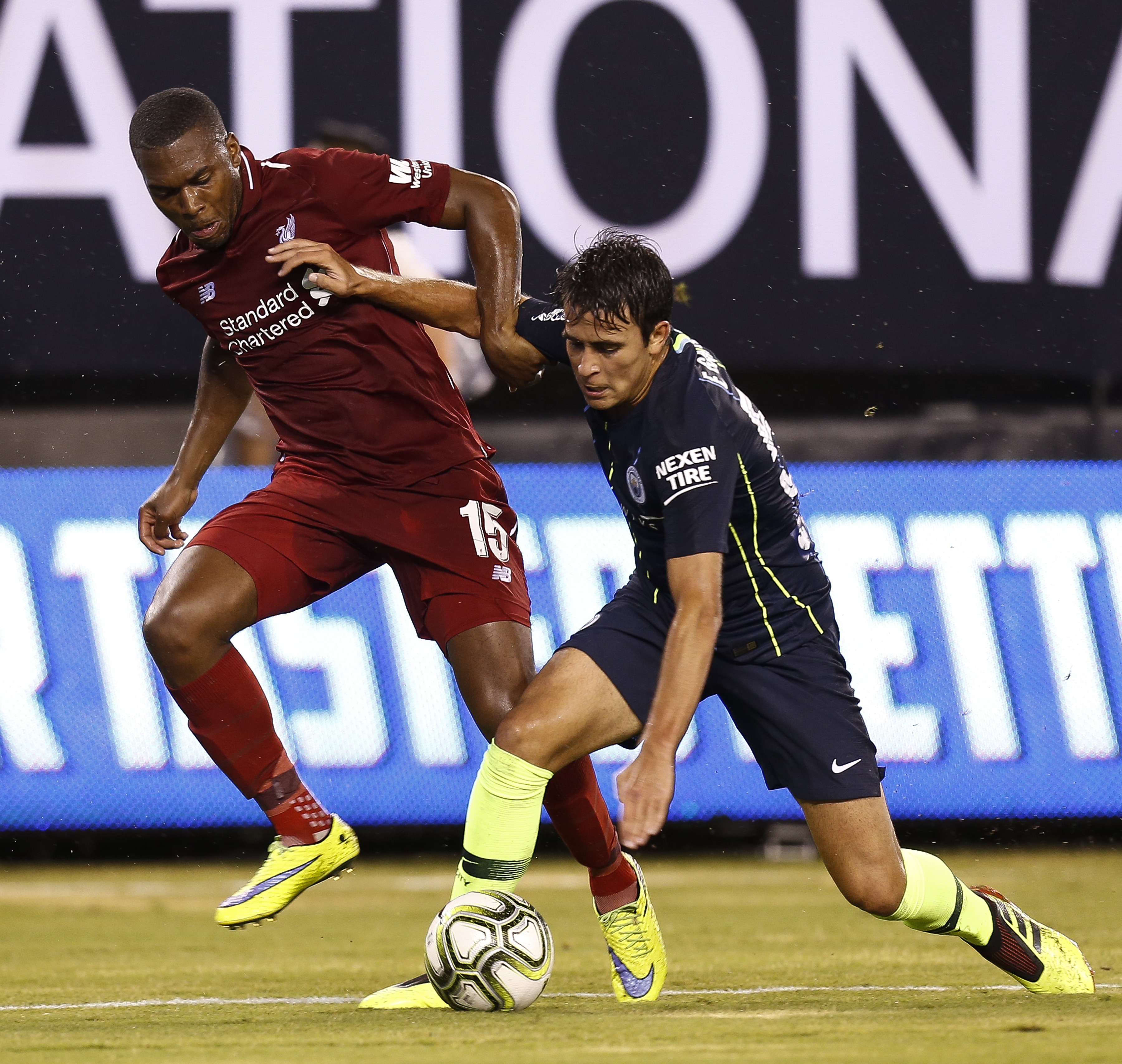 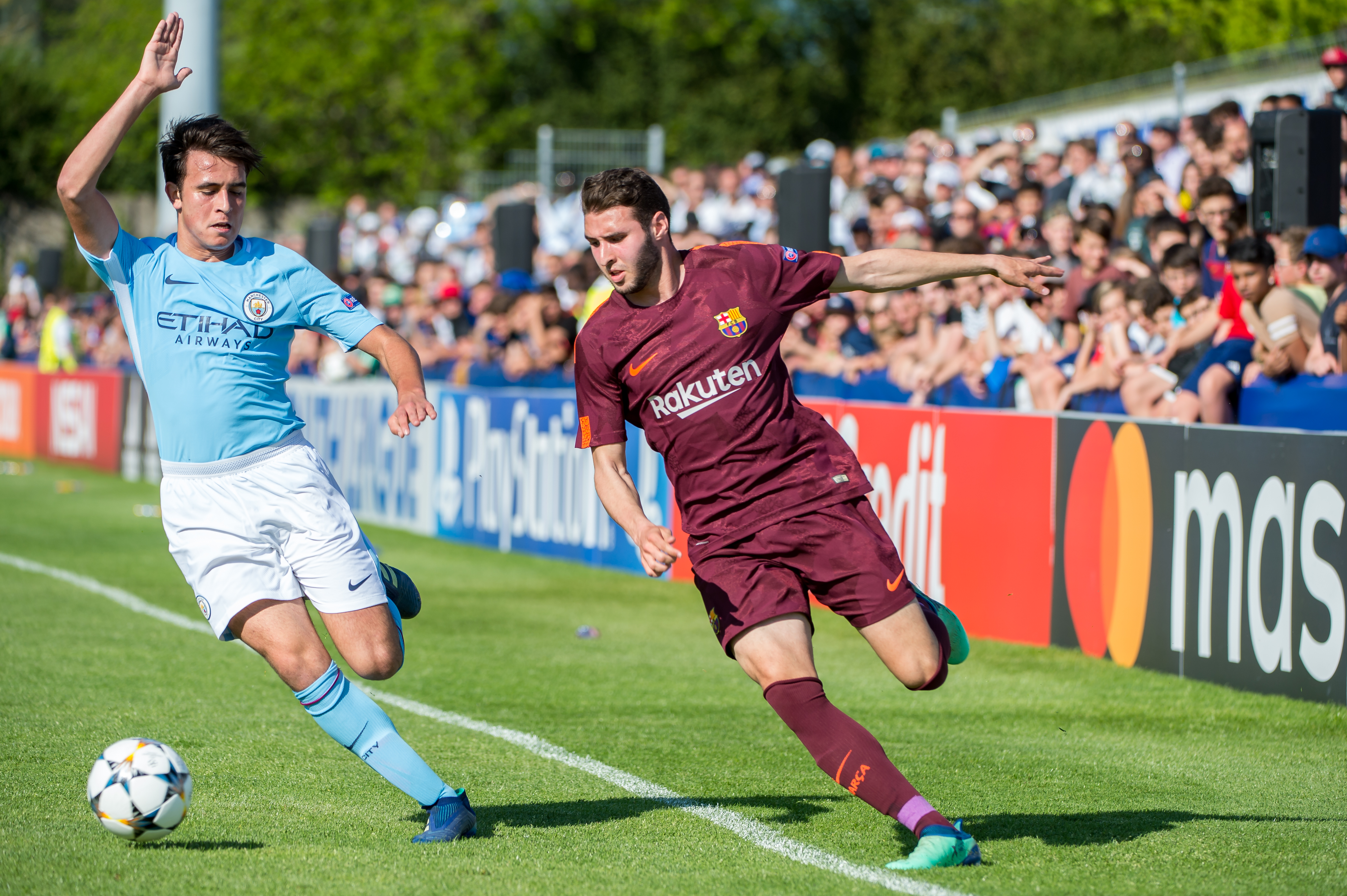 The maturity that he has displayed to everybody he has encountered around the CFA in the past year has also become evident on the pitch for City’s youth teams and now for the seniors.

He is very keen to talk about tactics, displaying a clear understanding of the game, and those who have come into contact with the youngster remark how he is extremely polite, although not shy, and comes across as much older than he actually is.

That is partly why, as at Barca, he has captained City’s U18 side despite being one of the youngest members of the squad. He represented Spain at the U17 World Cup and played the first two of his five matches in the Uefa Youth League, an U19 competition, when he was 16. He has also has played in the Premier League 2, an U23 competition.

He has often been used as a right-back, something he had not tried before leaving Barca, though he is most at home in the middle, as he has shown this summer when he has been barking the orders at his more senior team-mates. Of course, Guardiola has spotted his potential to be used at the back of midfield, too.

Last season he trained with the first team on several occasions and it is likely that he will do so again in the new campaign, and it is even a possibility that he could make the squad for a Carabao Cup game.

Serious first-team opportunities are probably still some way off, for a number of reasons. For one, the way Mohamed Salah crept in behind him to score on Wednesday night is a stark reminder of how big the step up is, even if the Egyptian was offside.

Yet Phil Foden, a player Guardiola genuinely loves, is six months older than Garcia and has already made something of a breakthrough. Like Garcia, Foden had spent some time around the squad before being given game time.

There is, then, an opportunity for Garcia. He may not have set the pulses racing last summer, but he just might in future.