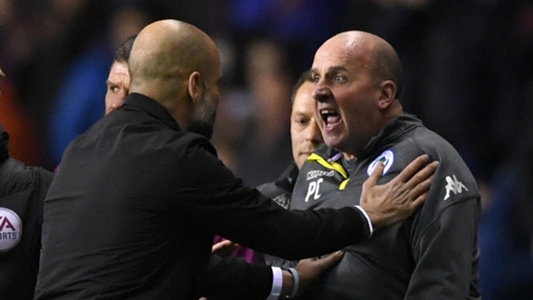 The Football Association has charged both Manchester City and Wigan with failing to control their players following Monday night’s ill-tempered FA Cup clash.

It has also been confirmed that Sergio Aguero will face no action for his role in a fracas with Wigan fans on the pitch at full-time, as reported by Goal on Tuesday afternoon.

The governing body has also confirmed that there will not be any action taken against either club for a confrontation between City boss Pep Guardiola and Wigan counterpart Paul Cook in the tunnel at half-time.

However, both sides are likely to be punished for the reaction of their players following Fabian Delph’s first-half red card.

“Both Wigan Athletic and Manchester City have been charged for failing to control their players in relation to the dismissal of Fabian Delph during last night’s [Monday] Emirates FA Cup fifth round tie,” an FA statement reads. “The clubs have until 6pm [GMT] on Friday 23 February 2018 to respond.”

Several Wigan players surrounded referee Anthony Taylor as he deliberated over Delph’s punishment, while City’s players waded in once the red card was shown.

Aguero, Guardiola and Cook were also involved in a touchline row but none of them will face specific action.

Those rows continued into the tunnel at half-time, with television footage showing Guardiola and Cook arguing as they made their way to the dressing rooms, but after speaking to relevant parties throughout the day on Tuesday the FA has decided not to act.

City were fined £35,000 for failing to control their players on two occasions last season, against Chelsea in December 2016 and Liverpool in March 2017.

The FA has also asked both clubs for further information on security arrangements at the DW Stadium and the behaviour of both sets of fans.

The statement continued: “In addition, both clubs have been asked to provide their observations following the crowd trouble at the end of the game and have until Monday 26 February 2018 to respond.”

Wigan and Greater Manchester Police are both looking into how hundreds of Wigan fans were able to invade the pitch at full-time, and why it took police and stewards so long to prevent home supporters approaching the away end.

Goal understands City are also considering a formal complaint to police over a fan who allegedly attacked Aguero. It is claimed the fan hit the striker, spat in his ear and said “suck my d***”.

It is also alleged that City supporters removed an advertising hoarding and threw it at police.