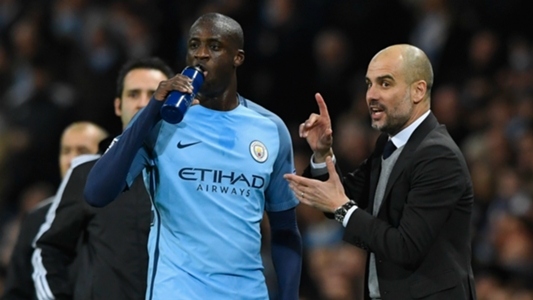 The outgoing midfielder’s decorated eight-season stint is due to be celebrated in Wednesday’s clash with Brighton and Hove Albion after City confirmed his contract would not be renewed.

Toure has proved an inspired signing since arriving from Barcelona, winning the Premier League three times, the Carabao Cup twice and the FA Cup once.

Guardiola, who sanctioned Toure’s 2010 move to City while in charge of Barca, expects a fond farewell for the 34-year-old.

“It’s a big occasion. We will try to play for him and win for him,” the City boss said.

“What makes clubs greater and bigger are the players and Yaya Toure is one of them. He’s an extraordinary person, he’s beloved in the dressing room, he doesn’t feel pressure.

“We will not judge Yaya on this season. He is the only guy last season who finished his contract who we extended because I thought he could help us.

“His behaviour was good, we have no complaints over what happened this season. I wish him well. He was so, so important [to establishing a winning culture].”

Guardiola would not be drawn on whether the former Gunners midfielder is likely to leave, however.

“I don’t know what’s going to happen. We are going to try to win six points and after that we will see what happens,” Guardiola added.