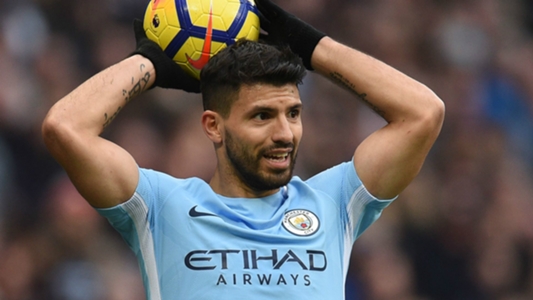 Manchester City boss Pep Guardiola has suggested that Sergio Aguero will not be fit enough to start Wednesday’s Champions League clash with Liverpool.

Aguero has been out of action since injuring his knee in training ahead of City’s win at Stoke on March 12.

City doctors initially feared a two- or three-week lay-off and Guardiola, speaking after Saturday’s victory at Goodison Park, believes the Argentine’s best bet is an appearance from the bench.

“We will see,” he said when asked if Aguero could return at Anfield. “Still he didn’t train. One training session.

“Hopefully he is much much better. Tomorrow we will see. In these situations it is day by day. Hopefully he can help us.

“Maybe not in the beginning, maybe the bench.

“Or because after that we have [Manchester] United and after that you have Liverpool in the second leg and maybe you have to change the system and have six strikers to win the game and we’ll need Aguero and Gabriel [Jesus] and Lukas Nmecha and Raz [Raheem Sterling] and everybody.

“So this is not one game, Liverpool. It is 180 minutes. You have to try and make a good performance there for the second leg.”