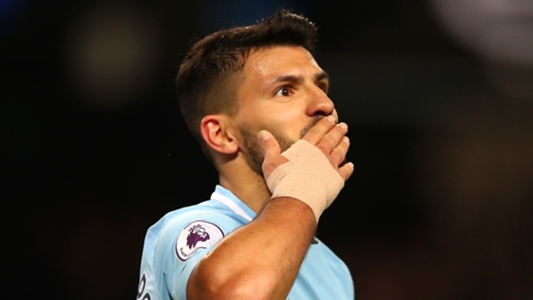 Pep Guardiola says he believes Sergio Aguero will stay at Manchester City this summer, but did point out that he cannot be sure that he will.

It has emerged that Atletico Madrid are keeping tabs on Aguero and are willing to re-sign him as a replacement for Antoine Griezmann, who looks set to join Barcelona ahead of next season.

At the end of last season, Guardiola insisted, as a matter of fact, that the Argentine would not be leaving the club despite speculation to the contrary.

Ahead of Sunday’s Premier League finale against Southampton, however, he could not be as certain, and once again stressed that it is Aguero who will decide when he leaves.

He then added: “I said, maybe 1000 times, [he’ll stay] until he decides his time here is over. That’s why I say it [the transfer] is not going to happen, but in football you never know.”

“I said it last season and this season many times and I say it today. That’s why I say it isn’t going to happen, but in football you never know.”

Goal has previously reported, via sources close to Aguero, that the striker is annoyed when Guardiola makes statements such as those on Friday.

According to those sources, while Guardiola says it is Aguero who will decide when he leaves, the reality is that he would be happy to sanction a sale.

Sources close to Guardiola, however, stress that he has been delighted with the 29-year-old’s progress this season, particularly in recent months, and that he wants him to stay at City.

The relationship between the two has been complicated, albeit increasingly functional, ever since Guardiola arrived at City in 2016, and any potential exit this summer is likely to provoke something of a blame game, with club and player likely to claim the other is responsible for the transfer.