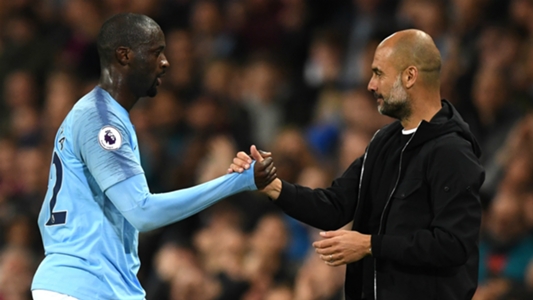 Yaya Toure has hit out at Pep Guardiola, claiming the Manchester City coach has a problem with players from Africa.

The Ivory Coast international left City at the end of the season after playing a limited role under the Catalan. It is the second time Toure has been moved on by Guardiola, having left Barcelona while the coach was in charge.

And Toure, 35, says he was treated unfairly by Guardiola, revealing a suspicion that it was because he is African.

“I want to be the one who breaks the Guardiola myth,” the four-time African Footballer of the Year told France Football.

“I tried to understand it and I even asked coaches for my stats. When I realised that they were as good or better, both in training and in matches, as those who played and were younger than me, I understood that it was not question of physicality. I don’t know why but I have the impression that he was jealous, he took me for a rival.

“I have the impression that Pep, without acknowledgment or respect, did everything to spoil my last season.

“He was cruel with me. Do you really think he could’ve been like that with Andres Iniesta? It got to the point I asked myself if it was because of my colour. I’m not the first, other Barca players asked the question too.

“Maybe us Africans aren’t always treated the same by certain people. When you see the problems [Pep] has often had with African players, everywhere he has been, I ask myself questions.

“He’s too intelligent to be caught. He’ll never admit [not liking African players]. But the day he picks a team with five Africans in it, I promise I will send him a cake!

“Beyond that, Pep likes to dominate and wants to have obedient players who kiss his hands. I don’t like that kind of relationship. I respect my coach but I’m not his thing.”

Toure made just one start in the Premier League in his last season at City, being given the captain’s armband in their penultimate match.

The veteran midfielder hailed the title-winning season as the “perfect” farewell, but there was a bitter element to his departure and he blames Guardiola for it.

“He stole my farewell with City, a club with beautiful fans. I would have liked to leave with emotion of this club the way Iniesta [left Barca] or Gianluigi Buffon [left Juventus]. But Pep prevented me.”

Toure made over 300 appearances and scored 79 times in all competitions for City since joining from Barca in 2010. He helped them to three league crowns, two League Cups, an FA Cup and Community Shield.