Pep Guardiola is seemingly unwilling to bring Yaya Toure in from the cold as his Manchester City team prepare to brave sub-zero temperatures and a Thursday trip to Arsenal.

The Premier League leaders will meet their north London foes once more, having run out convincing 3-0 winners in Sunday’s EFL Cup final at Wembley.

Arguably the only blot on a destructive second-half showing at the national stadium was a hamstring injury to influential midfielder Fernandinho.

Guardiola did not have a like-for-like replacement for the Brazil international in the holding role on his bench, although Ilkay Gundogan and Kevin De Bruyne combined effectively enough at the base of the midfield to take apart the lacklustre Gunners.

Toure would stand as the most natural deputy for Fernandinho, were it not for the fact he has been restricted to five substitute cameos in the Premier League this season.

The 34-year-old was left out at Wembley, having featured in every round of the EFL Cup and Guardiola offered a terse response when asked whether Toure could play at Emirates Stadium.

Guardiola, who banished Toure from the first-team picture during the early stages of last season amid a public spat with the player’s outspoken agent Dimitri Seluk, would not be drawn on the specifics of what the City crowd favourite must do to earn a return but suggested he is short of his best level. 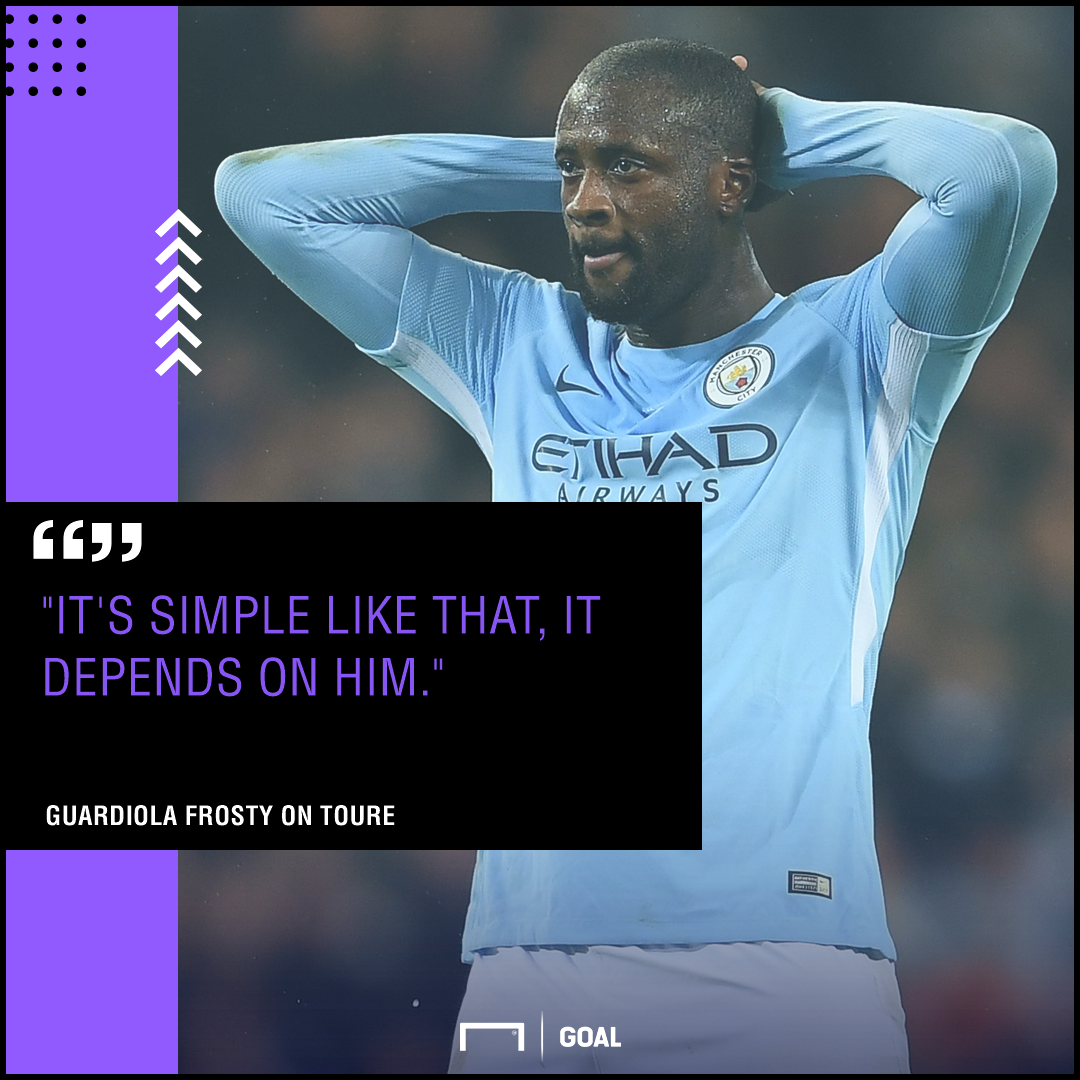 City youth-team product Phil Foden featured on the bench ahead of Toure last time out and appeared as a substitute during the closing minutes.

The 17-year-old will reportedly sign an extended contract with his boyhood club when he turns 18 in May and Guardiola left no doubt over the club’s position.

“He knows, his family knows, his agent knows. We would like to keep him with us for a long time,” he said, having seen Foden’s fellow England youth star Jadon Sancho depart for Borussia Dortmund last August.

“He has to grow up, get strong. But the huge quality is there.”

The main Wembley sub-plot concerned Guardiola wearing a yellow ribbon on the touchline in solidarity with political prisoners in his native Catalonia, in defiance of a Football Association (FA) charge.

The 47-year-old began wearing his ribbon to draw attention of pro-independence politicians Jordi Sanchez and Jordi Cuixart being jailed as part of the crackdown that followed last October’s Catalan referendum and, after the FA decided to charge Guardiola over wearing a political message, thousands of City fans also donned ribbons at the national stadium.

Guardiola said there had been no further contact from the FA but maintained he was open to dialogue.

“Of course I am going write the letter and explain our position but it is the same – I am available for the FA, absolutely. It is no problem,” he added, before addressing the support for his cause from City fans.

“It was the feeling to belong to something. I’m really grateful for that initiative. They don’t have to do it, it is in another country but it makes me really happy because it helps people understand what is going on.”