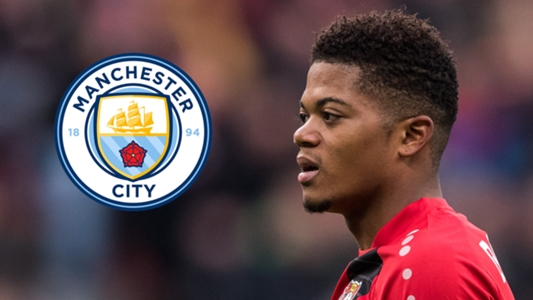 City are confident of striking a deal for Napoli midfielder Jorginho and hope to announce his arrival before the end of May .

The exact structure of the deal is yet to be put in place and it is understood there is the possibility that City could involve Claudio Bravo as part of any agreement.

The Blues want a midfielder and a forward this summer and are keen to get their business done before the World Cup, but while they are close to bringing in Jorginho they are still weighing up their options in attack.

Goal revealed last week that the Blues have whittled down their shortlist to just two names , although they are willing to forego both of those if Paris Saint-Germain’s Kylian Mbappe becomes available at the end of the season.

It can now be revealed that Bailey is one of two names on City’s ‘non-Mbappe’ list.

The 20-year-old has scored nine goals and laid on six assists in the Bundesliga this season.

City have been keeping tabs on the Jamaican for some time and included him on a four-man list of targets in January.

They have maintained their interest since then and while other players have fallen out of contention, Bailey is still regarded as a viable option.

However, City are not thought to have made any concrete moves to open negotiations and they are still believed to be in a position whereby another club could make a rival move. The Premier League champions are aware of interest from some of Europe’s leading sides.

Bailey has struck up a friendship with City winger Raheem Sterling, who was born in Jamaica and later moved to England, and that could work in the club’s favour should they decide to press ahead with a move.

That decision is only likely to be made, however, once City ascertain whether Mbappe is available – at an agreeable price – and willing to move to the Etihad Stadium.

City do not want their business to drag on past the end of the World Cup and they are likely to make an approach to PSG and Mbappe in the coming weeks.

Pep Guardiola spoke to Mbappe personally last summer as part of City’s attempts to sign the youngster from Monaco.

If Mbappe is not for sale City will reassess their other two options and press ahead with strengthening their squad ahead of the World Cup.