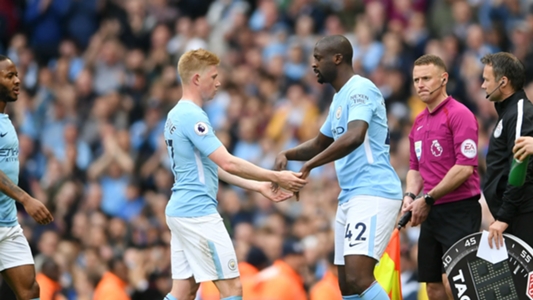 Kevin De Bruyne has suggested Yaya Toure fell from favour with Pep Guardiola at Manchester City because he was not fit enough.

Toure was restricted to a bit-part role in his eighth and final season at City as Guardiola steered the club to dominant triumphs in the Premier League and Carabao Cup.

The 35-year-old’s only Premier League start of the season came as captain in his farewell home appearance against Brighton and Hove Albion, with the title already won.

In an astonishing interview with France Football, the former Barcelona midfielder claimed the duo’s time together in Catalonia paved the way for an uncomfortable final season in England and accused Guardiola of being motivated by “revenge” and “jealousy”.

De Bruyne was widely viewed as City’s star performer in their record-breaking run to the Premier League title and believes there might have been far less conspiratorial reasons for his team-mate looking on from the sidelines.

“I don’t know what Yaya said or if it’s wrongly written or exaggerated. When you don’t play there’s always something you try to find,” the Belgium midfielder told BBC World Football.

“We had the best season ever, so in the end the coach took the right decision to play with the team who played a lot.

Toure was banished from the first-team picture during the early days of Guardiola’s City reign in 2016 after returning for pre-season overweight, but the towering Ivorian worked his way back into favour after a spat between Guardiola and his outspoken agent Dimitri Seluk to win a one-year contract extension.

Seluk claimed his client is ready to prove Guardiola wrong and proposed the seemingly unlikely scenario of Toure playing for a basic salary of £1 per week.

“Now Yaya has many offers from different countries, where they are ready to pay a lot of money, but we decided to dedicate the next season to Guardiola,” he told Sport24.

“At a time when huge sums are being spent in England for the purchase of football players, I officially declare that Yaya is ready to move as a free agent to any top-six English club with a salary of £1 per week, with certain successes resulting in bonuses.”

When contacted by Omnisport, Manchester City declined to comment regarding further allegations made by Toure in the interview.