After Saturday’s 4-0 demolition of Bournemouth initially moved Manchester City a staggering 14 points clear at the top of the Premier League, manager Pep Guardiola was asked if there were any possible ways in which his side could improve on what appeared to be footballing perfection.

The Catalan quickly countered: “Attack more fluently, more chances; it is not easy when the opponents stay back.

“In football, always you can improve, individually or collectively, so it is not a target to be perfect – it does not exist in the world. But now, this is a good ‘Merry Christmas’.”

The only way things could be any better for Manchester City this Christmas is if they had won every single one of their 19 Premier League matches so far. As it is, they will have to make do with 18 wins and one draw. Things are going pretty well for Guardiola’s men.

The first time the Blues faced Bournemouth this season was back in gameweek three, and while they have gone on to become probably the best team in Europe since then, they still looked a little unsure of themselves back in late August.

Before that game they had secured a no-frills win at Brighton and battled to a 1-1 draw with Everton, ironically looking more organised and more determined with 10 men than they had with 11. 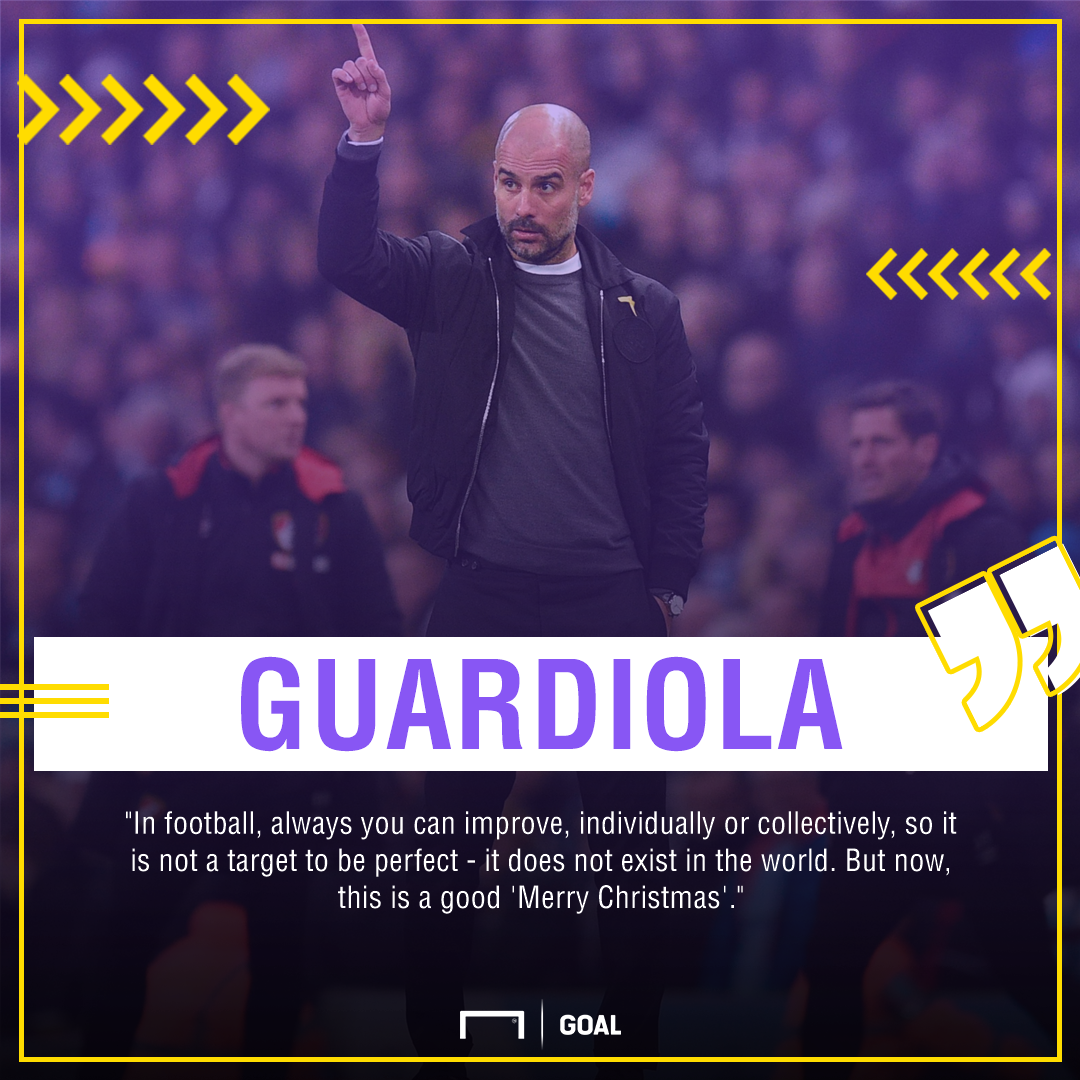 City, with Guardiola admitting his concern at his side’s lack of cutting edge, changed their shape for the game the Vitality Stadium, but they barely looked any more coherent.

Raheem Sterling scrambled in a 97th-minute winner that day and it was wondered if that was to be the spark City needed. What a spark it has proven to be!

They have won every single league game since, and have only lost one of their other nine games in the two other competitions. Even that solitary reversal came against Shakhtar Donetsk in the Champions League, when Guardiola rested more than half of his preferred line-up ahead of the Manchester derby.

The Catalan started the season hoping to switch between two distinct, different formations, but they have found such a groove that they have had no need whatsoever to adapt their shape against any opposition.

After that first Bournemouth game, they scored 22 goals in their next five outings. They went to Chelsea, played the champions off the park and picked up a 1-0 victory that could have been much more but proved their mental strength all the same.

The City players sang Kevin De Bruyne’s name in the Stamford Bridge dressing room and if he doesn’t win player of the year from here, it will only be because David Silva is just as brilliant as the Belgian. 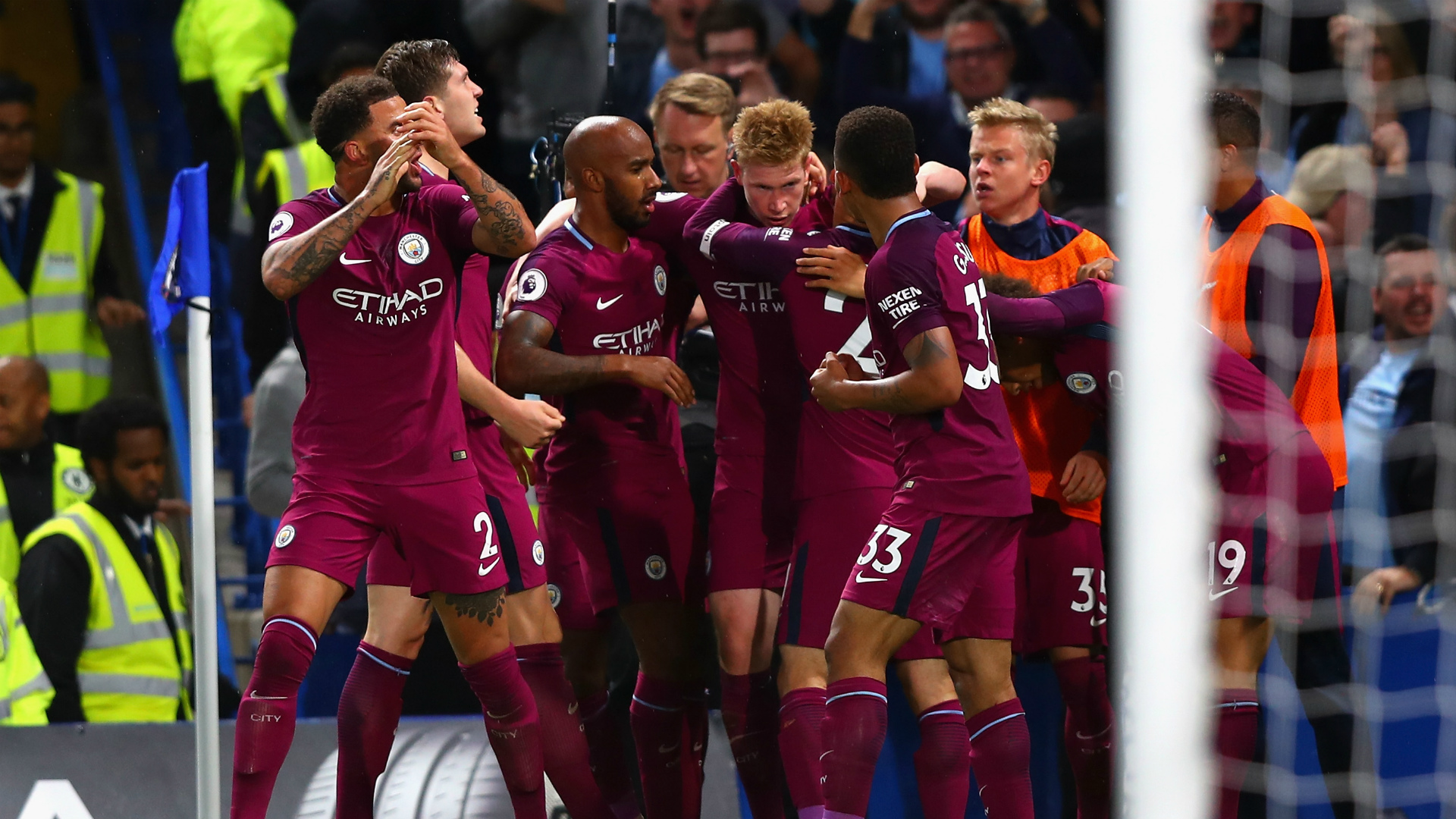 City put seven past Stoke in the next game, reacting to the visitors’ second goal of the game by scoring three in seven minutes themselves.

Then they beat Napoli, one of the few teams anywhere who play the kind of attacking, fast-paced football that people supposed may cause City problems. Guardiola’s men won 2-1. The bigger the game, the better City seem to play.

When they went to Napoli they were under the cosh for 20 minutes and went a goal down. They won 4-2, with the then Italian league leaders barely able to lay a glove on them by the final whistle.

They beat Arsenal in second gear. They overcame Leicester despite losing the influential John Stones early on, a game in which they scored two goals that sum up what they have become; the first arrived at the end of an intricate passing move, the second after a devastating counter-attack.

Many suggested things would get tricky without Stones, a key cog of the Guardiola passing machine, and they were right. To an extent.

Huddersfield, Southampton and West Ham all held City until late on, but the Blues, with their various attacking threats, found a way to win each time. Sterling, as he did at Bournemouth, got two of those late winners, one in the 83rd minute, one in the 96th.

All of a sudden the flow of goals had seemed to dry up. That could be a problem, they said, at Old Trafford. If the two goals at Leicester were textbook examples of City’s skills, the two at United summed up their sheer will to win by any means necessary.

“Two disgraceful goals” Jose Mourinho labelled their set-piece efforts. If he sounded especially bitter it soon emerged why: he had had a bottle lobbed at him after telling City, in his own particular way, to keep the noise down. 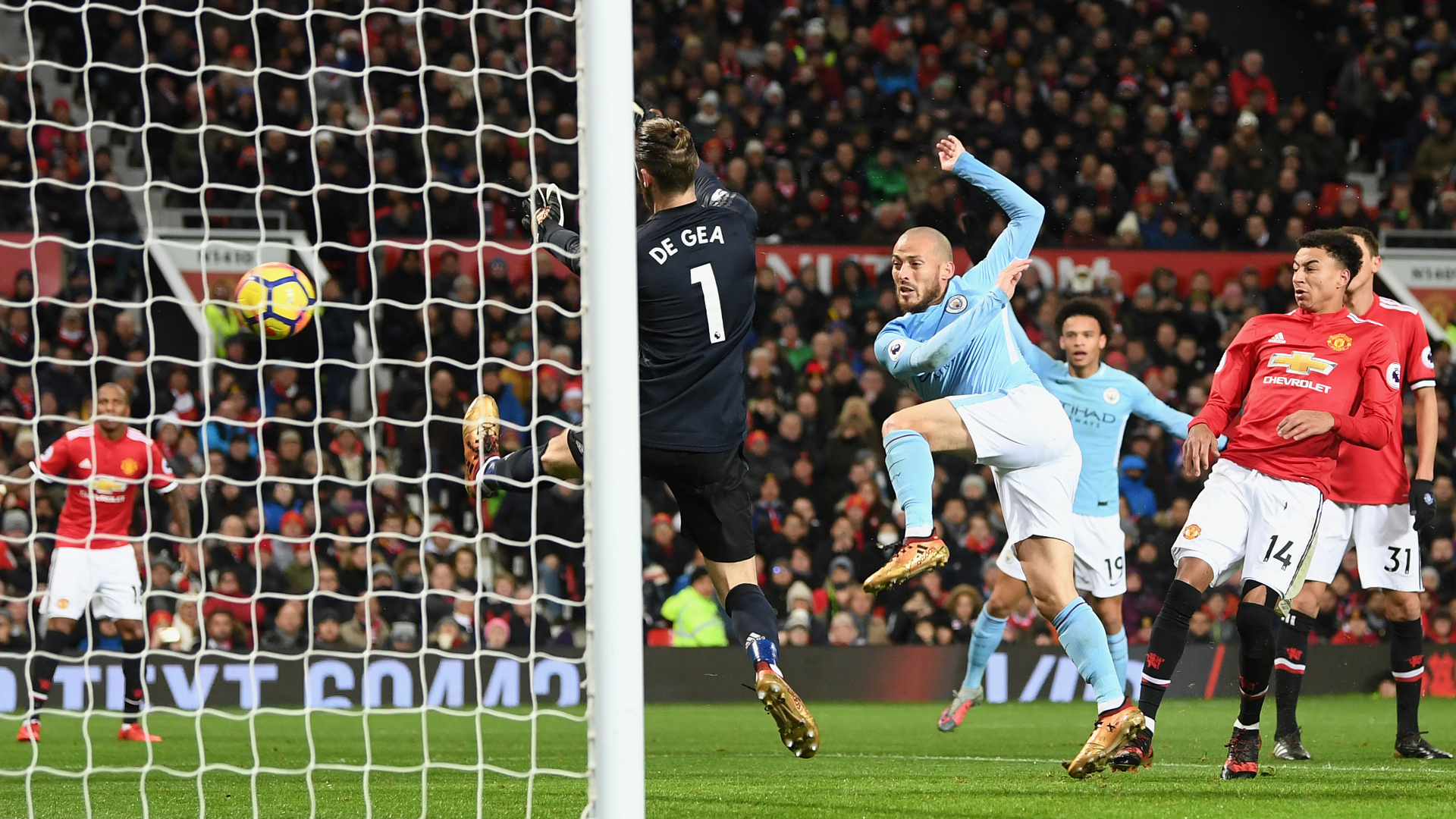 There was no brawl when City pumped their music out of the visitors’ dressing room at Swansea a few days later. The Welsh side were on their last legs under Paul Clement and City picked them apart seemingly without breaking a sweat. They did work hard, of course, that’s why they are where they are, and why that win at the Liberty Stadium broke the all-time top-flight record for consecutive victories.

But did that run continue when Tottenham, with their own intense brand of football, came to town? Of course it did. Again, City proved that they simply step it up a gear in the biggest games.

Sterling had been kicked in the leg four times and abused by a vile racist thug hours before the match, but scored twice anyway.

David Silva, who has always called the tune and is now playing the best football of his life, missed out, but Ilkay Gundogan, as he did in Naples, ensured the Spaniard was not overly missed. On the pitch, that is; in the dressing room afterwards his team-mates sent their support as he dealt with a family issue.

That type of team spirit can only be created by a group of men enjoying themselves and winning matches. Many of them are playing the best football of their careers. 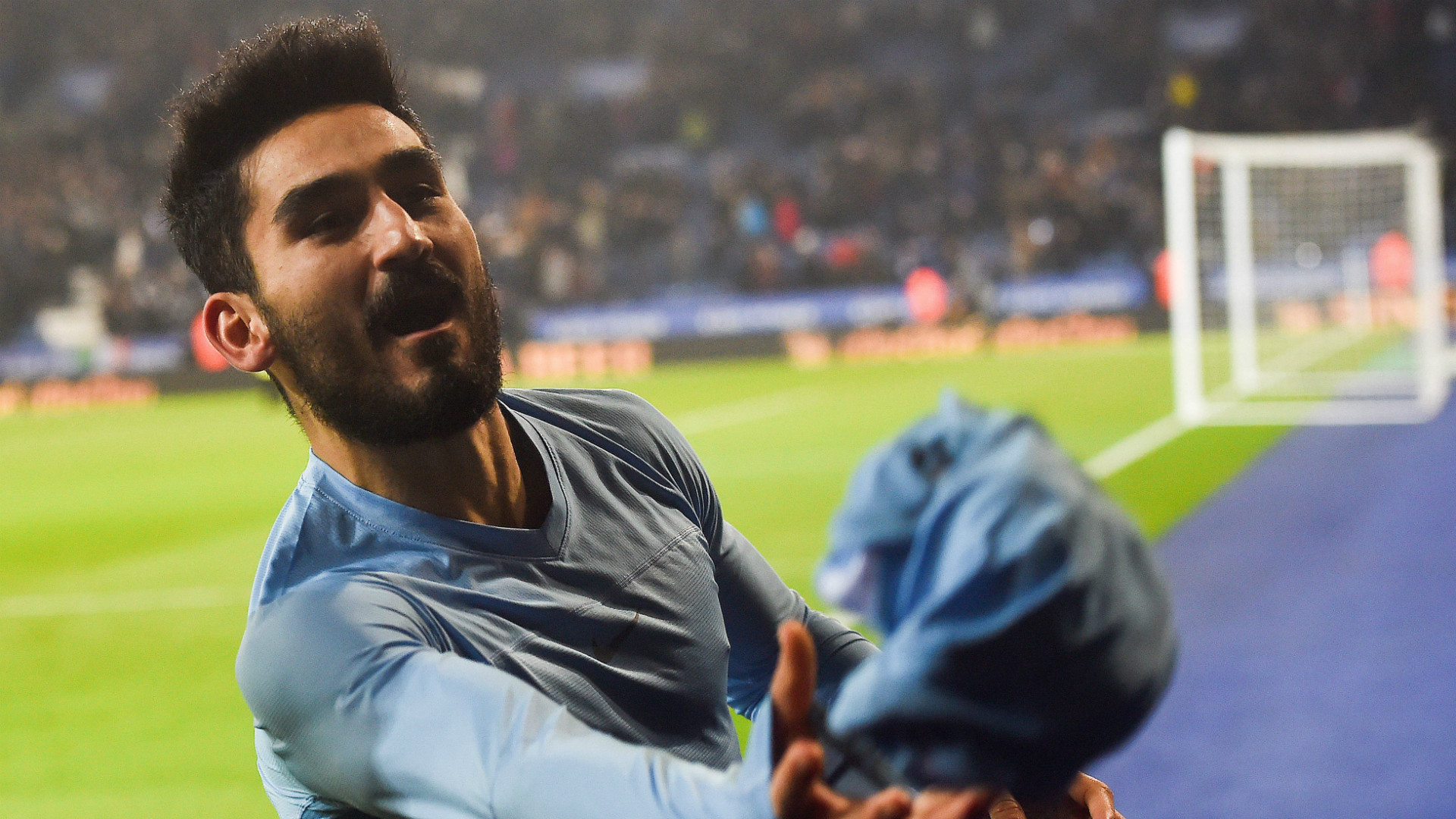 Ederson has been a revolution in goal – and out of it, too. Kyle Walker, a much derided £55 million signing, has been worth every penny. Fernandinho is a man, a 32-year-old man, reborn. Nicolas Otamendi’s transformation has been remarkable. Some laughed when Fabian Delph rejected a move to Stoke in the summer, insisting he could play for City. Now he’s one of the most consistent left-backs in the league.

While Sterling has scored 16 goals in all competitions, Leroy Sane has had a hand in more home goals than anybody else in the league. Benjamin Mendy only showed glimpses of his talents on the pitch before his knee injury but he has been such a huge presence in the dressing room you would have to say he is worth the £52m City paid anyway.

Even those less than happy with their treatment by Guardiola – Sergio Aguero and Claudio Bravo among them – are loving everything else about life at City these days.

The mood is so good that Guardiola hardly wants to change a thing. In the summer, he was desperate for players to come in and shake things up. Now he is happy to leave thing as they are. 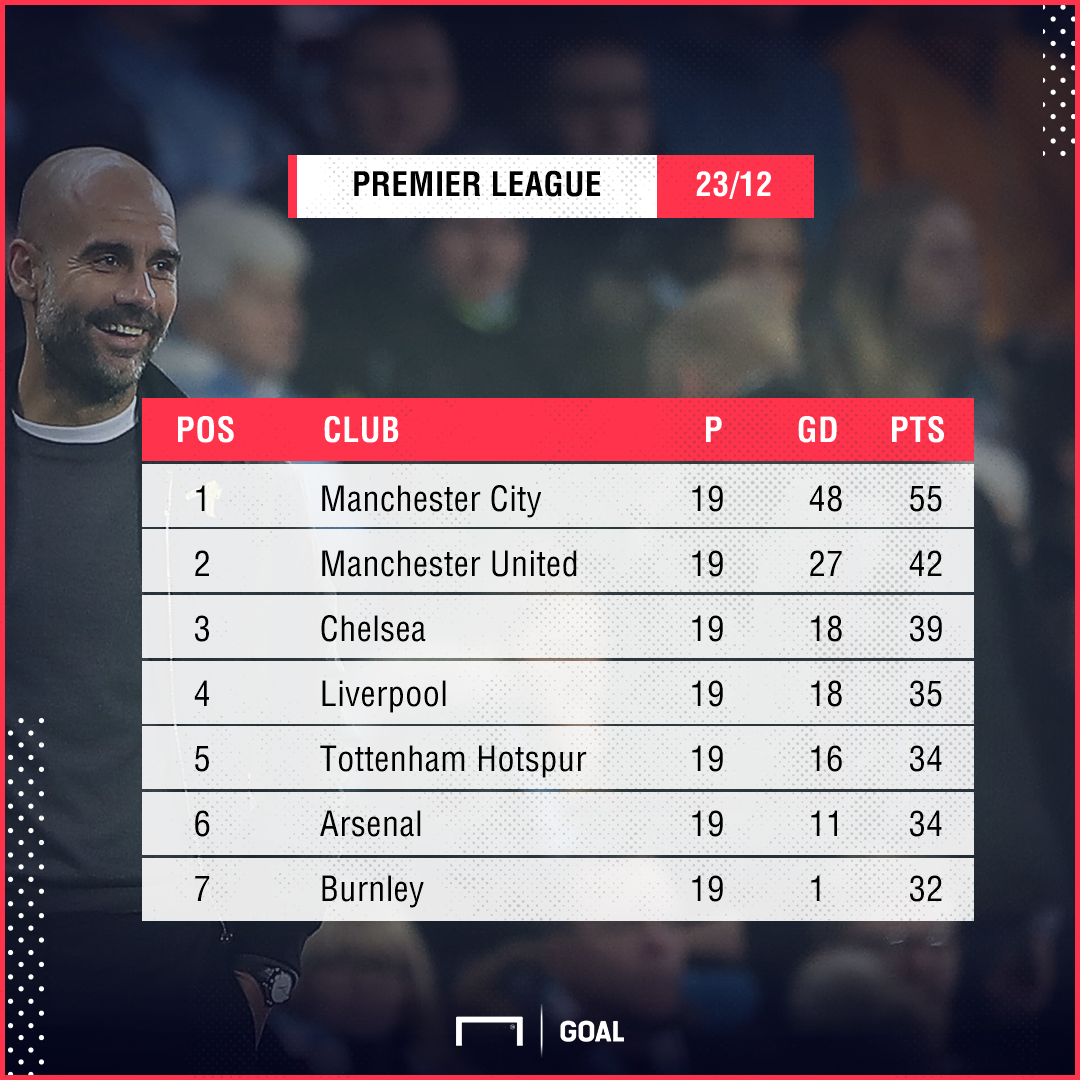 He wanted Alexis Sanchez and a centre-back who would provide quality and leadership. Such has been his side’s quality – we cannot merely say ‘form’ at this point – the Catalan is now reluctant to rock the boat. Alexis can wait until the summer, Virgil van Dijk can come if he doesn’t mind sitting on the bench sometimes.

One would not imagine the Dutchman would have too many problems with that, considering the trophies he could be lifting come the end of the season. City are 13 points clear in the league and will face Bristol City in the Carabao Cup semi-finals. They could not have hoped for a better Champions League draw than Basel, either.

They are on course to win the title with a record number of victories, points, and goals. But during their two days off this Christmas, the City players will take their chance to relax and enjoy what they have already done, not what lays ahead.

In the four months between their two games against Bournemouth, they have cleared every hurdle placed in front of them, with performances that have been brilliant, dogged, or both.

Opposition, injuries, fixture pile-ups – none of it has mattered. We are already debating if this is the best Premier League team ever. That says it all. A “good ‘Merry Christmas'” indeed!