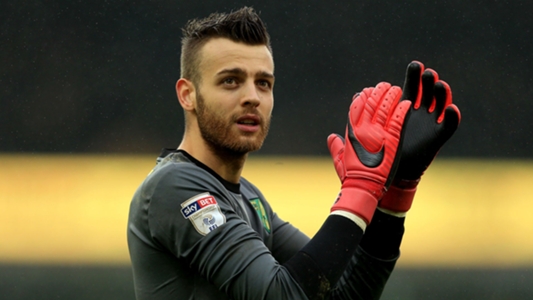 Southampton are in talks with Manchester City over a £15 million (€17m/$20m) move for young goalkeeper Angus Gunn, Goal has learned.

City are ready to cash in on Gunn, 22, who spent last season on loan at Norwich City, but the Premier League champions will insert a buy-back clause in any deal.

Leicester City are also thought to be keen to sign the Man City academy graduate, although Southampton are currently regarded as favourites to land him.

Gunn is highly rated by the Blues but they are unable to offer him many, if any, first-team opportunities next season, and the player himself is keen for playing time after a year in the Championship.

Southampton have been keeping tabs on Gunn, the son of former Norwich keeper and manager Bryan, for several months and are ready to match City’s asking price.

Gunn’s likely move away coincides with City’s attempts to find a permanent home for Joe Hart, who has spent the last two seasons on loan at Torino and West Ham.

Goal understands that Oleksandr Zinchenko could also be sold this summer, for a similar fee to what City will receive for Gunn.

The Ukrainian attacking midfielder proved a capable deputy at left-back last season, but despite the fact that the Blues do not plan on strengthening the position this summer, they are prepared to listen to offers for the 21-year-old.