Pep Guardiola never misses an opportunity to remind everybody that, in his opinion, Lionel Messi is by far the best player in the world.

Ask the Manchester City manager how anybody else compares to the Argentine and you will be told that there isn’t a comparison at all.

Mohamed Salah and Kylian Mbappe are among the players to have been likened to Messi recently, but Guardiola isn’t having it.

“Nobody can sit at the same table as Messi,” he began when asked about Mbappe, who he actually tried to sign. And on Salah: “I respect him a lot, but I’ll help him by telling him to try to avoid being compared with the other guy.”

Sometimes Guardiola brings Messi into the argument himself, like when he was asked about Kevin De Bruyne’s chances of winning the Ballon d’Or in September 2016: “He is one of the best players I have worked with. Messi is on his own at the table, but Kevin is in the next table and he is right up there.”

After Christmas he was asked if City are favourites for the Champions League this season . “Who does Messi play for?” he countered. “So Barcelona are the favourites.”

You get the point; Guardiola likes Messi (and tables).

So you’d have been forgiven for assuming what was coming when Guardiola was asked on Saturday whether De Bruyne can win the Ballon d’Or this time.

“No doubt,” he asserted. “It is not one game, it’s the whole season, every three days playing that way. Every three games. The way he played, it’s difficult to find one in Europe.” 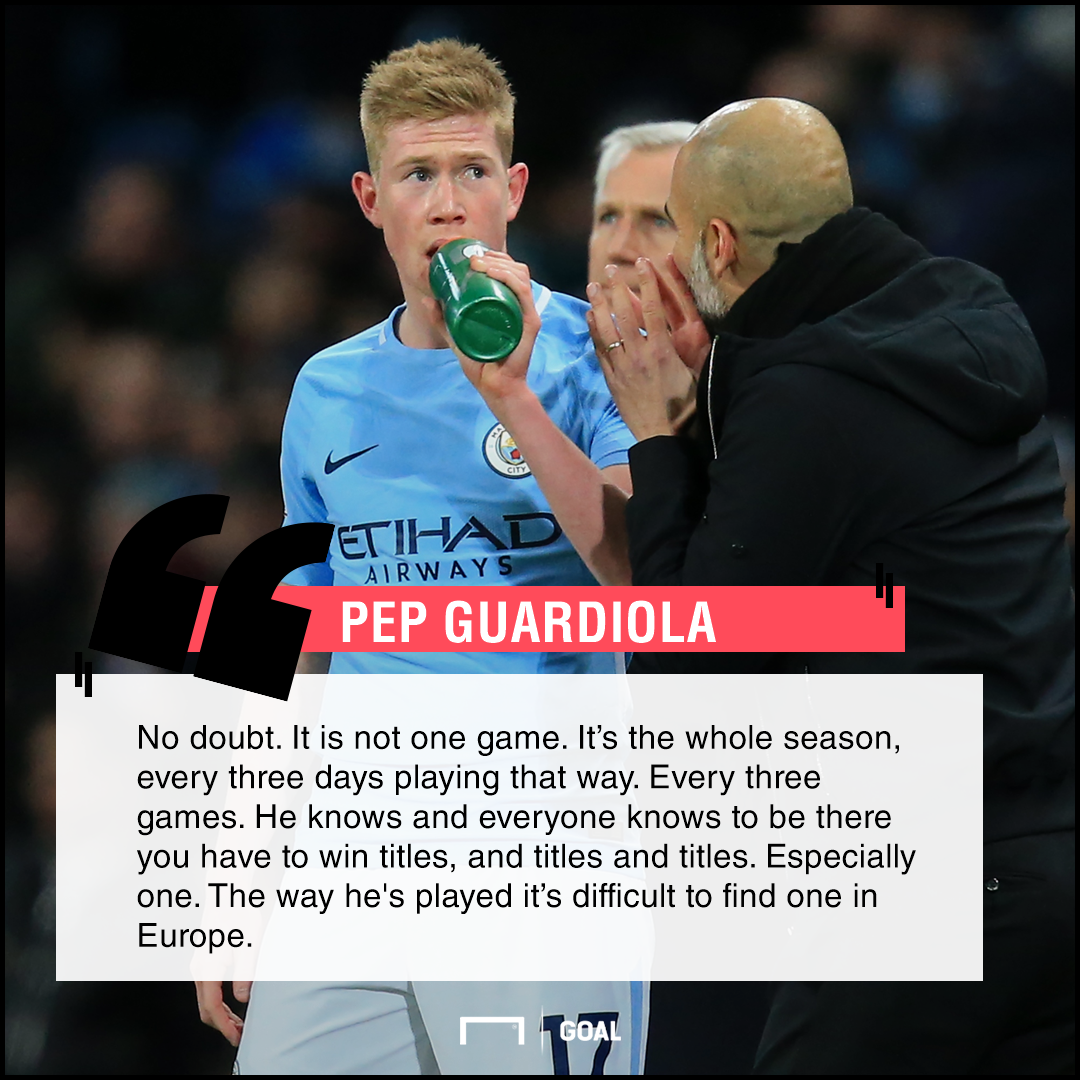 For Guardiola to allude to others in Europe but not mention Messi tells you everything you need to know about how highly he rates De Bruyne. He thinks he’s right up there.

And for good reason. As the Catalan noted, De Bruyne has been pulling the strings for City all season. He has been the best player at the best club in Europe.

The assist statistic is not always an accurate measure of a player’s influence, but given De Bruyne has developed a knack of delivering the most precise deliveries from seemingly anywhere on the pitch it is fair to say he is as creative as the numbers suggest.

Look at the first two of his three assists against Leicester on Saturday and then consider this Opta statistic: since his Werder Bremen debut in August 2012, he has provided 77 assists in Europe’s big 5 leagues, more than any other player in that time. That’s one more than Messi.

Even so, statistics do not do him justice. There are moments of magic that cannot be conveyed by numbers that put him among the very best and separate him from the stat-padders. The energy (300km covered in the league alone), the touches, the technique, the precision.

Like Messi. It’s important to read he has scored 27 goals and made 14 assists this season, but it’s even better to see him doing it.

But when it comes to the Ballon d’Or, what matters most is  when  you do it. Messi and Cristiano Ronaldo have delivered on the biggest stages for over a decade now. De Bruyne, just like Neymar and any of the challengers, will need to show his best in the next few months.

“He knows and everyone knows to be there you have to win titles, and titles and titles,” Guardiola added on Saturday. “Especially one.”

The World Cup will be an extra consideration this year, though it’s hard to argue it will be decisive given Messi and Ronaldo have been crowned the world’s best individuals without playing for the world’s best nations in 2010 and 2014.

And City will surely fancy their chances in the Champions League, especially as they face Basel on Tuesday. That tie will hardly define De Bruyne’s season, and indeed should present him with further opportunities to shine. 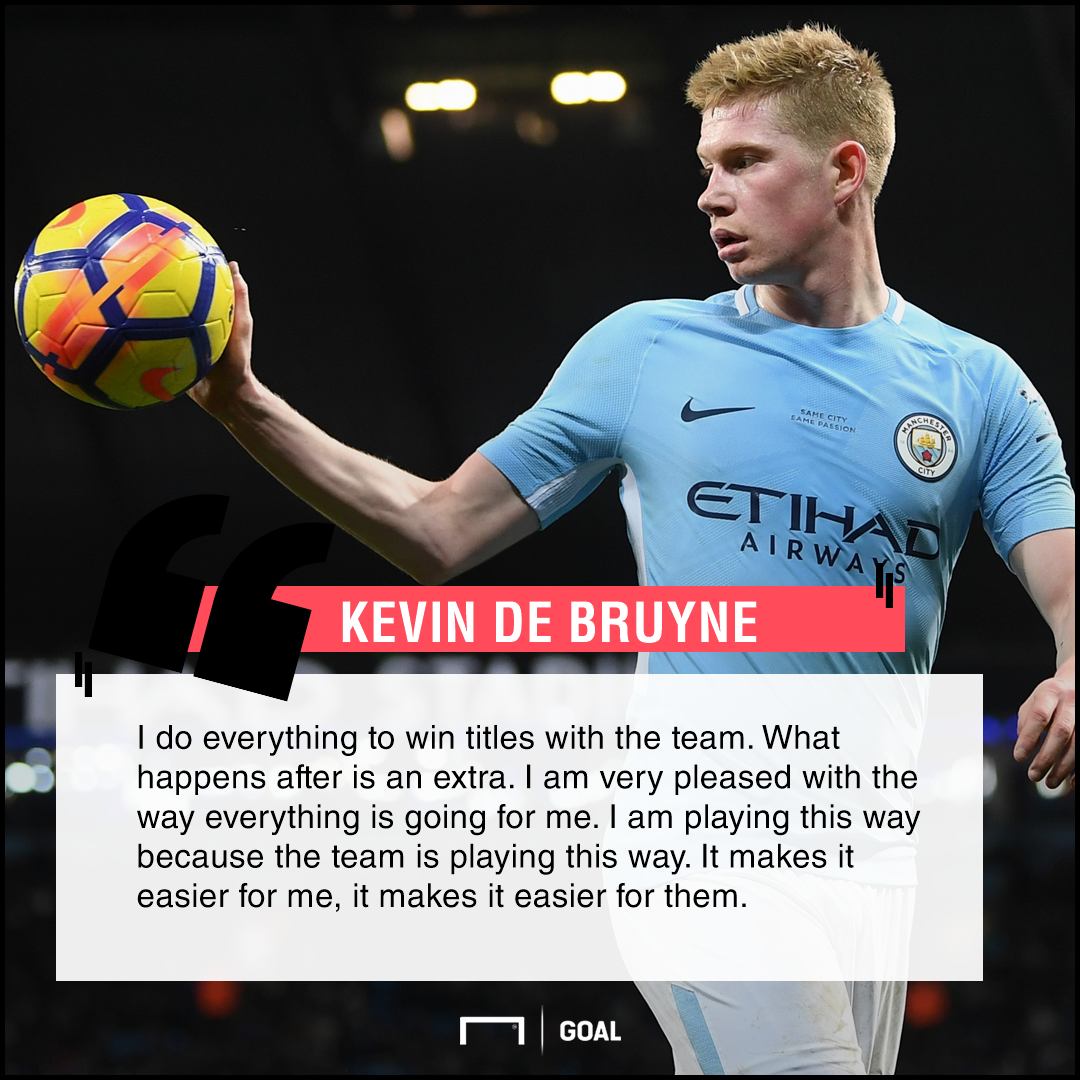 Things will not be so straightforward for the other new pretender to Messi and Ronaldo’s throne, however.

Neymar received plenty of criticism for making the move to Paris Saint-Germain, but while many have suggested he took the easy option by moving out of Messi’s shadow (and for earning €36.8m a year to do so), it should not be forgotten that he has been tasked with delivering European glory to a club that has not been in the conversation since Carlo Ancelotti’s side ran Barca close four years ago.

The Brazilian is living up to the hype , it must be said. Like De Bruyne he is the driving force behind one of Europe’s newer super powers, and like De Bruyne his stats are up there with the best around, but the fact that fans across France are flocking to see him proves that he has the extra quality you need to be the best.

How he fares against Real Madrid, in his mini-battle with Ronaldo, will have a major impact on how his first season in France is evaluated.

You get the feeling that Neymar, like Ronaldo, is driven by a desire to win the Ballon d’Or, which will ramp up the pressure on both men.

It does not seem that De Bruyne will be burdened by that kind of thinking – even if his agent has ensured he’ll be paid an extra £600,000 per year for being named the world’s best.

“I do everything to win titles with the team,” he told reporters at the weekend. “What happens after is an extra. I am very pleased with the way everything is going for me. I am playing this way because the team is playing this way. It makes it easier for me, it makes it easier for them. At the end, if you get an individual honour it is beautiful.”

The time has come to make those performances count. While nobody can deny that De Bruyne, Neymar, Messi and their teams have impressed so far this season, you would not be surprised if Ronaldo turns everything on its head and leads Madrid to an unprecedented third consecutive Champions League title.

That’s the level the new contenders must now aspire to. Whether that’s enough to earn a place on Messi’s table is another matter altogether.