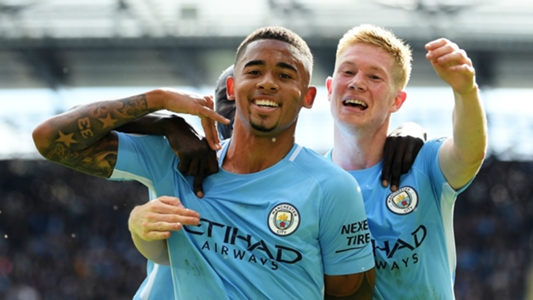 Gabriel Jesus has agreed a new Manchester City contract, less than a year since he made his debut for the club,  Goal  can reveal.

The 20-year-old has enjoyed such a fine start to his City career that Sergio Aguero, the club’s all-time record goalscorer, is no longer assured of a starting spot.

The Brazil striker signed from Palmeiras in the summer of 2016 but only joined up with the Blues in January, following the culmination of the Brazilian season.

City have been keen to tie their top assets to new deals ahead of next summer’s World Cup, and following Jesus’ start to life in England they believe his profile will rise even further following the tournament in Russia.

He will soon earn approximately £150,000 per week at a basic level, which is more than double his current pay packet.

That figure will be topped up with a number of performance-related bonuses, such as minimum games played in a season, and bonuses should City win trophies.

The new contract is expected to run until 2023.

Jesus is yet to put pen to paper on his new deal but senior City sources have told Goal that all parties have reached a total agreement, including a renegotiation of the striker’s image rights. Official confirmation is expected in the New Year.

City are also close to agreeing a new deal with midfielder Kevin De Bruyne, as first reported by Goal in October .