Manchester City and Paris Saint-Germain have made strong starts to the campaign and dominate our August XI, with plenty of defenders impressing at both ends of the pitch

Defenders have dominated the Goal Fantasy Football scoring for August, with five scoring 31 points or more last month. As a result, our Team of the Month lines up in a 5-3-2 formation, with Manchester City captain Vincent Kompany emerging as its top player with 42 points.

The line-up includes four players from Kompany’s Manchester City and another four from Paris Saint-Germain, reflecting the impressive start both clubs have made in their domestic leagues.

In midfield, Lyon’s Nabil Fekir leads the way after a hat-trick against Caen earned him 23 points, taking his total for the month to 35. Yaya Toure and Blaise Matuidi push out Bayern Munich winger Douglas Costa, who has had an assist in every game so far.

Thomas Muller and Pierre-Emerick Aubayemang lead the line in an all-Bundesliga front two, with the Bayern and Borussia Dortmund rivals having combined for eight goals and an assist in the first three games of the season.

No players from Spain or Italy make the Team of the Month but they only started their campaigns in gameweek three and therefore have played at least two matches less than all of the other major European leagues.

Gareth Bale is the top forward in Spain, collecting 17 points after scoring two goals and adding an assist in his first two games, but Cristiano Ronaldo is 10 points behind his team-mate he has collected just seven points so far.

Even further behind is Lionel Messi, who is on a single point after being deducted points for missing a penalty in Barcelona’s opener against Athletic. Expect the superstars from La Liga to be represented in next month’s team!

TEAM OF THE MONTH – AUGUST 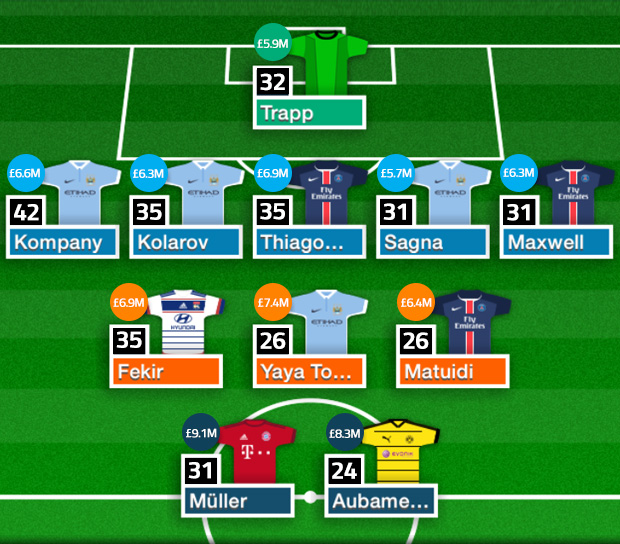 Kevin Trapp – PSG (£5.9M) – 32 points PSG have not conceded a goal in their four league games with Trapp between the posts. The French champions look like they will dominate Ligue 1 again this season so expect more clean sheets for their new goalkeeper.

The Player of the Month has amassed 42 points from the opening four games of the Premier League campaign, scoring twice and helping Manchester City to four clean sheets.

Across the channel Thiago Silva has been in equally sparkling form for PSG, playing in all four of their victories and netting a first goal of the season for himself.

The Serbian defender appears to have won the left-back berth at City off Gael Clichy, starting all four games and scoring against Everton.

New PSG signing Layvin Kurzawa will have to displace Maxwell for a spot in his new team’s XI, with the veteran left-back having played all four matches so far and provided an assist.

Like Kolarov, Sagna has nailed down a place in Manuel Pellegrini’s XI this season and also has an assist in addition to his part in their clean sheets.

Matuidi’s has been a key figure in midfield for PSG for some time now and has started the season with two goals and two assists in four games.

A superb hat-trick against Caen boosted Fekir’s points total for August, with the young Frenchman laying on four goals and an assist in total.

The Ivory Coast star has looked back to his best for City so far this season, starting all four of their games so far and recording two goals and two assists.

The German goal machine, who scored 13 league goals last season, is nearly halfway to that total already with five hitting the net in his first three games.

Aubameyang has impressed ever since joining BVB despite the team’s fading fortunes under Jurgen Klopp, scoring 32 goals in 68 games – three of which have come in three matches this season.

IT’S NOT TOO LATE TO PLAY

It’s not too late to create your ultimate team – our new league for late starters began this week! The official Goal Late League is open to registrations.

Weekly and monthly prizes are up for grabs – spend your £75M wisely and you could be a winner!

1 thought on “Goal Fantasy Football: Messi & Ronaldo miss out on Team of the Month”