As far as Player of the Year controversies go, Mohamed Salah’s victory ahead of Kevin De Bruyne is not on the same scale as what happened in April 1999.

With Manchester United and Arsenal fighting for the title, a month before United secured an historic treble, David Ginola won the award.

The winger had scored three league goals, none of which during the voting – his first came eight days before he was named winner. His performances, though, were enough to see off competition from Dwight Yorke, David Beckham, Roy Keane, Dennis Bergkamp and Emmanuel Petit.

It was a quite incredible decision that has looked less and less justifable the more time has passed.

So given Salah has had an unquestionably excellent season, hardly anybody will look back in the future and wonder what on Earth his peers were playing at, even if the excellent De Bruyne has missed out.

Pep Guardiola, however, does not agree with the outcome. The Catalan has long railed against individual awards but still felt compelled to point out his belief De Bruyne would have been a more deserving recipient. 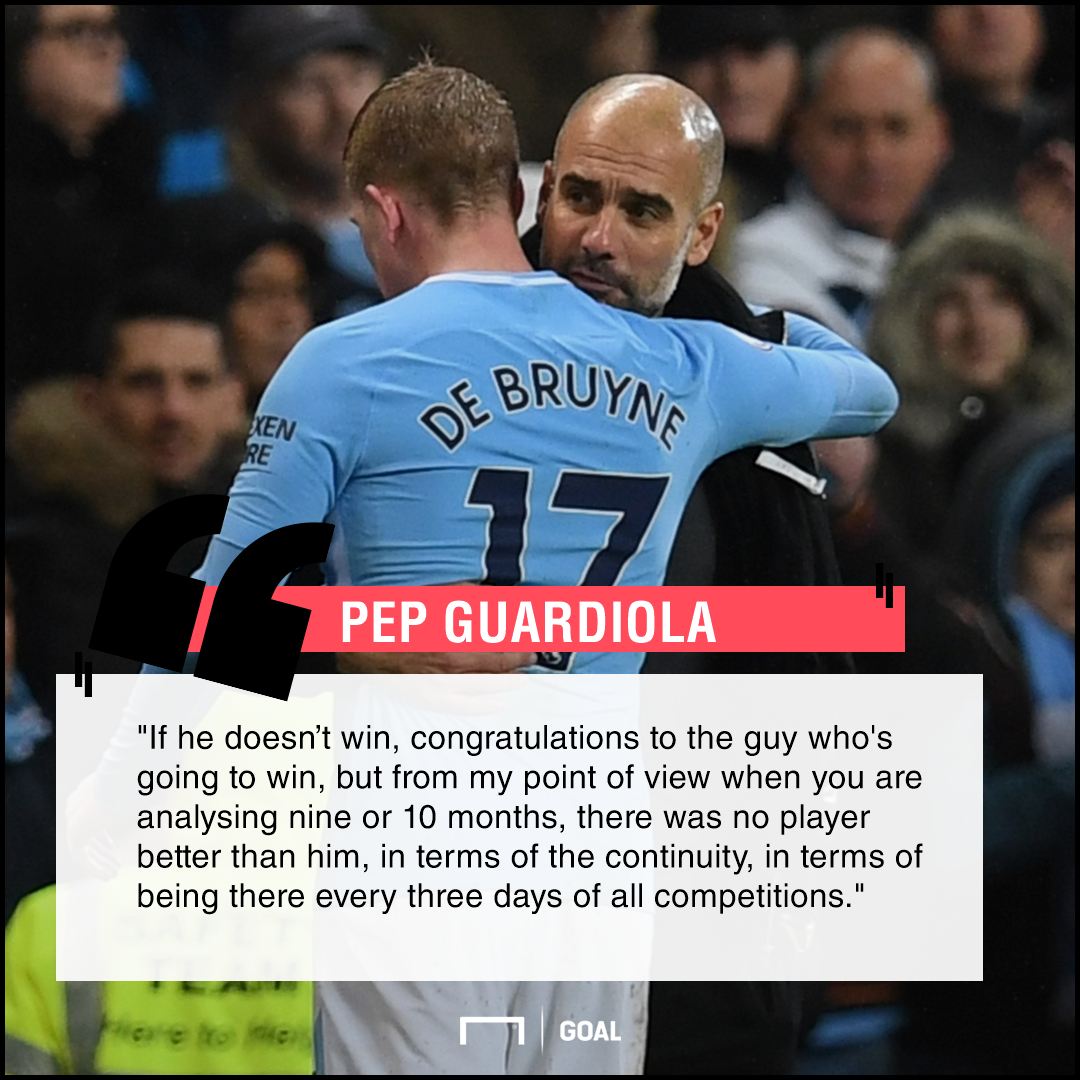 “You know my opinion about these awards,” he said, suggesting he might duck the question. But he pressed ahead: “If he doesn’t win, congratulations to the guy who is going to win, but from my point of view when you are analysing [the last] nine or 10 months, there was no player better than him, in terms of the continuity, in terms of being there every three days of all competitions.

“I am sorry. Maybe in numbers there are guys better than him, but [there is no better] player in this season. For me he was the best, it is my opinion but the opinions of the players could be different.

“I would like to feel that he deserves it but at the end, in the summer time, he will be at home, being a champion.”

A condensed version of that view even appeared on the official @PepTeam twitter account, so you can be sure he feels strongly about it. Behind the scenes City feel disappointed, too; they got wind of Salah’s win earlier in the week and, whether as a result of that or not, the size of the travelling party down to the awards night following Sunday’s game with Swansea had shrunk somewhat.

And that disappointment will only feel more acute after De Bruyne delivered a pointed reminder of his brilliance with a rocket in the 5-0 win against the Swans.

That was the fifth time he has scored from outside the box this season, more than any other Premier League player. That stat in itself serves as proof that he is also capable of providing the pieces of magic that have boosted Salah’s campaign

In fact, all the other players on the pitch, and the referee, watched the replays on the big screen before restarting the match. It was a strike that ranks alongside superb efforts against Chelsea, Tottenham and Leicester, all of which were scored with his “weaker” left.

But there is so much more to his game than wonderful goals and for so long he was the runaway favourite to land the PFA award precisely because he was doing everything at the heart of a team sweeping all before them. 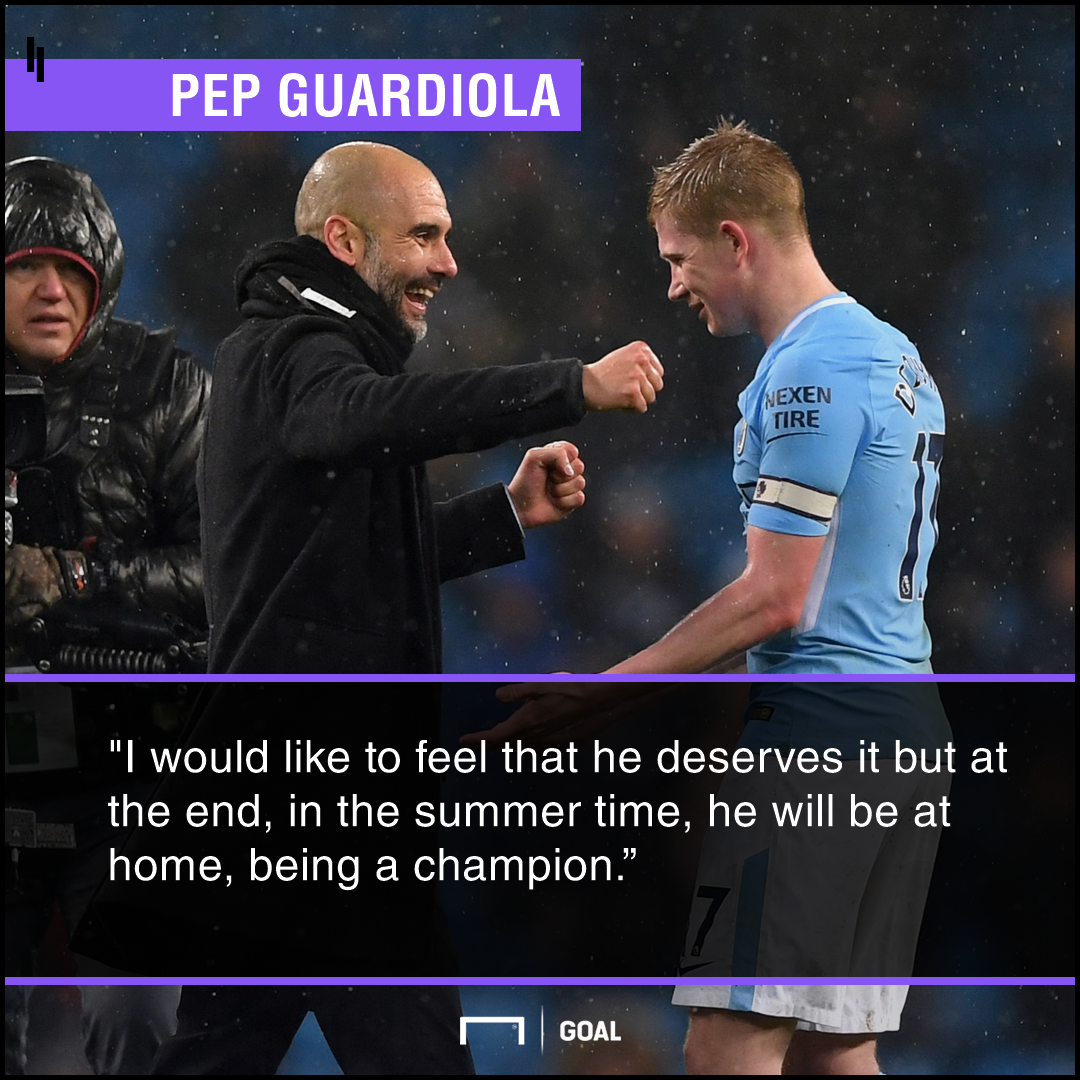 As City raced away at the top of the table he was the man pulling the strings; his range of passing and silkiness of touch are fused with a robust, hard-running midfield style that has rarely, if ever, been seen in English football. He is like a wonderful blend of Bergkamp and Keane, two of the men beaten out by Ginola all those years ago.

Yet the best player on the best team has not been named the best player in the league, and there are a couple of smaller factors that will have helped Salah’s cause; De Bruyne endured a small dip in form around the time the voting papers went out to the players, and there are other City players worthy of the award, too, which will lead to something of a split vote.

But to focus on those would be to do Salah a disservice. For starters, you cannot blame a man for putting in performances when his team has needed them most.

He has been scoring goals all season, but in the last few weeks he has gone into overdrive. And while most players, De Bruyne included, usually say they are not so interested in individual awards and accolades, Salah has made no attempt to hide his desire to set new records.

His displeasure at seeing Harry Kane controversially awarded an extra goal to his tally, tweeting “wow really?!”, spoke of his ambition to claim as many accolades as possible.

He has scored 31 in the league already, an impressive enough tally even without taking into consideration the quality of many of those finishes, and if he keeps this form up he will top the 34-goal record set by Andy Cole and Alan Shearer – and that was in a 42-game season. In all competitions he has 41 goals and he has publicly admitted he wants to beat Ian Rush’s Liverpool record of 47.

And look at those other names he is compared to. Kane, Cole, Shearer, Rush – some of the best No.9s to ever play in English football. Salah is, ostensibly, a winger. In truth, while he starts off out wide he usually finds himself in the box – but the fact he is revolutionising his position is only another reason to vote for him.

And while it is easy to look back now and say a United player should have won the 1999 individual award because of their collective achievements after votes were cast, it would be only fair to give Salah further benefit of the doubt, given Liverpool could yet win the Champions League next month.

So while Guardiola and City have plenty of reasons to believe De Bruyne should have won, there can be no genuine argument against Salah. Both have had phenomenal campaign and surely there would have been few complaints had they actually been named joint winners.

Unlike Ginola’s infamous win, sharing the award would have told the story of the season, and two of the finest individual campaigns in recent memory.