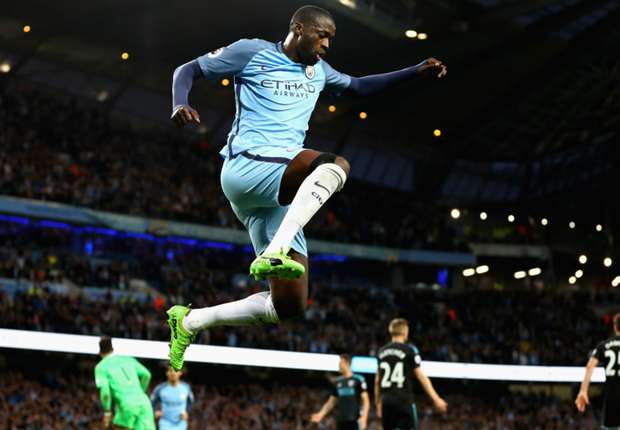 The Ivorian was spoken of in glowing terms by his young team-mate, after the 34-year-old was given a new Manchester City contract this week

Manchester City winger Raheem Sterling has hailed team-mate Yaya Toure as “a machine” after he was rewarded with a new contract.

The Ivorian’s future at Etihad Stadium looked bleak following his ostracism from the first team for the majority of the first three months of the 2016-17 season.

Manager Pep Guardiola handed him a surprise start against Crystal Palace on November 19 and Toure repaid that faith by scoring both goals in City’s 2-1 win.

The 34-year-old went on to play an integral part in the second half of City’s season and was handed a new one-year deal this week, ending uncertainty over whether he would stay in Guardiola’s plans next term.

Sterling says it is a “pleasure” to play alongside Toure and has praised the way he can control matches from midfield.

“Uncle Yaya – what can I say about him?” he told City’s official website.

“He’s done it at the highest level and he’s done it over many years for City. It’s a pleasure to share the pitch with him.

“Some of the stuff he does is incredible. You can always learn from him.

“The way he controls the game is brilliant and he is so composed on the ball.

“He can play wherever and whenever he wants. He’s a machine.”

Delighted to have signed a new contract. Thank you to all the fans for your support! Excited for the new season #ComeOnCity!!! pic.twitter.com/32M8ywybq4