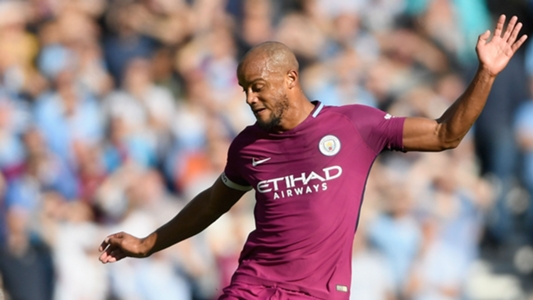 Vincent Kompany has been ruled out of Manchester City’s game with Liverpool on Saturday.

Kompany picked up a calf problem while with Belgium on international duty, his 15th such injury in five years.

Pep Guardiola insists the Belgian will not be out for a long time, but says he will not be able to feature against Jurgen Klopp’s side.

“He played with Belgium against Gibraltar,” Guardiola said. “They won 9-0. He had a little problem in his calf. I think he will not be able for tomorrow.

“It will be short, but the next time he will not be able to play.”

Guardiola insists he has enough cover to cope with Kompany’s absence, despite failing to bring in a new centre-back during the summer.

“The window is over,” he added. “With Vincent or without Vincent, we thought maybe we need another one, but we have [Eliaquim] Mangala, we have Tosin [Adarabioyo] and of course there are other options and other players that can play in that position.”