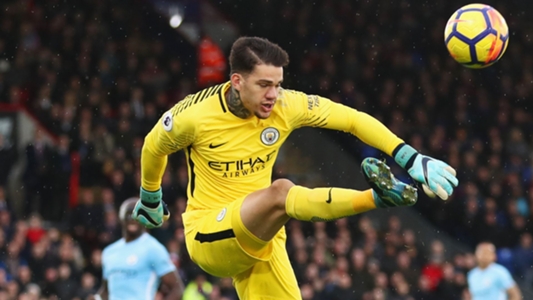 Manchester City goalkeeper Ederson says he hopes to get on the scoresheet before the end of the season.

The 24-year-old has been a revelation in the City goal this season following his £35 million move from Benfica last season, impressing with his pin-point distribution and calmness under pressure.

The Brazilian boasts a giant kick and has come close to providing an assist on several occasions this season, but now he admits he wants to go one better.

Fans at the Etihad Stadium chanted for Ederson to take City’s penalty during the 5-0 defeat of Swansea City on Sunday, only for Gabriel Jesus to step up instead.

But the goalkeeper is clearly determined to get another opportunity in the coming weeks.

“I heard them chanting my name, asking me to take the penalty, but Gabriel went there,” he told ESPN. “Unfortunately he missed it and Bernardo [Silva], fortunately, scored, but if the manager had asked me to go there, I would have definitely scored.

“I’m not sure if I would be able to do set-pieces, but I’m good at penalties, either using power or technique when I’m shooting. City have their regular penalty takers and we have good options, but if Pep asks me to take it, I’m there. Hopefully it will happen (before the end of the season), I’d like to score.”

Ederson has also acknowledged for the first time that he was aware of the pressure placed upon him following his big-money move last summer.

The former Benfica man has earned a place in Brazil’s World Cup squad as a result of his impressive season and he says he has proven his quality.

“I am very happy to be a champion, because I have always dreamed of playing in the Premier League and I had the opportunity to make this wish this year,” he added.

“I arrived with a heavy weight because my transfer was very expensive and there were a lot of doubts in some English newspapers, but I was able to show my value.”