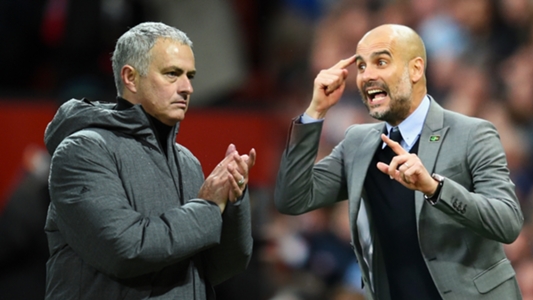 Mourinho suggested in the build-up to last weekend’s Manchester derby that City often make cynical challenges when caught out of position to stop their opposition’s counter-attacks.

“They attack with a lot of players and when they lose the ball, they are many times unbalanced in numbers,” he said. “They have lots of people surrounding the ball area and they have a very strong – and this is a great quality – transition in the next few seconds after they lose the ball and many times, they need what is called a tactical foul. Then it is up to the referee to analyse and to make a decision, but I cannot speak about that.”

The Football Association have asked Mourinho to explain those comments, leading to the possibility of disciplinary action for the United boss.

But when asked about the accusation ahead of City’s game with Tottenham on Saturday, Guardiola said he “never, never, never, never” asks his players to commit fouls, and suggests it is not something that is common in football.

“I don’t know how many fouls we make on the pitch,” he told reporters at a press conference. “I don’t know. But I think when you have 70 per cent possession we are not that team. It can happen. When we have the ball, we kick each other.

“I think that doesn’t happen in football. I don’t know statistically but I don’t think so. I never, never, never, never sent a message to my players. You can ask the players, these players and the old players, if my message on the pitch was to make fouls. I don’t use this kind of message.”

Guardiola did acknowledge that his team are not “saints”, but he says their organisation and positioning is responsible for limiting break-aways.

“To be ready, to be close,” he said when asked how his players prevent themselves from being caught out. “To be close to their run. Of course, we make fouls. Of course we do that. We are not saints. Of course we do fouls. It’s because of the way the game is. Sometimes, when dribbling, you make a foul and get a yellow card. That’s football. [But] when you have a high average of keeping the ball… that is what we try to do.”