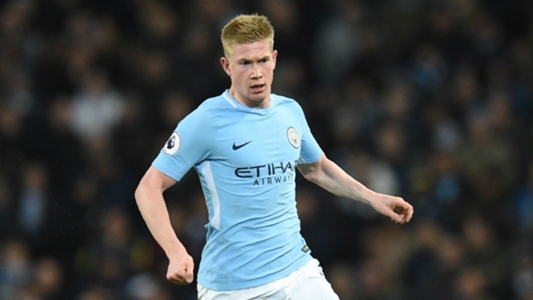 Pogba gave an interview to the BBC in the build-up to United’s 3-1 victory at Arsenal on Saturday, in which he said he would like to see City suffer from the kind of fitness problems he believes have beset Jose Mourinho’s side so far this season.

Those comments sparked uproar among Blues supporters, and they were quick to revel in the France international’s woe after he was shown a straight red card for stamping on Gunners full-back Hector Bellerin, which will keep him out of Sunday’s game at Old Trafford.

City maintained their eight-point lead over United at the top of the Premier League by beating West Ham 2-1 on Sunday afternoon, but speaking after that match De Bruyne was in no mood to discuss Pogba’s comments, or any cosmic power, though he did say he would not wish an injury on a fellow player.

“I don’t believe in that s***,” he said bluntly. “I’m a very straight forward guy. If someone believes it is karma then OK, everyone has their right to their opinion.

“I don’t want anyone to get injured. It’s a competition, you want to play against the best teams and the best players.”

Pogba’s absence may impact Mourinho’s game plan for the derby, given the United boss bemoaned the midfielder’s absence following an insipid goalless draw against Liverpool at Anfield earlier this season, but De Bruyne is unsure exactly which way the Red Devils will play.

“It depends what they want to do,” he added. “Pogba’s a massive player. I know him a little bit. He’s unbelievable. He took a red card and that’s the way it goes: you have injuries and suspensions.

“We’ll play the same there. We never change. We try to do the things that we are good at. That gives us the best chance to win.