The Football Associaton will seek observations from both Manchester City and Wigan as part of a wide-reaching investigation into the ill-tempered FA Cup clash between the two sides on Monday night.

Wigan knocked City out thanks to Will Grigg’s 79th-minute goal but the match was overshadowed by other events, with fans, coaches and players all involved in clashes during and after the game at the DW Stadium.

The FA will spend Tuesday studying footage of a number of incidents, including footage obtained by broadcasters and supporters, and speaking to those caught up in the most contentious scenes.

Both clubs, their managers and several players, including Sergio Aguero, could all face action, depending on what the FA finds in the next 24 hours.

It is expected that City striker Aguero will be asked for his version of events as the FA seeks to establish exactly what happened when the Argentine was confronted by supporters on the pitch at the final whistle.

Television footage showed that Aguero was involved in a confrontation with supporters. Sources close to the striker have told Goal that he was struck in the head from behind and spat at before attempting to push an aggressor away, although the FA will use various different camera angles, as well as credible footage filmed by supporters inside the stadium and posted on social media, to establish the facts.

The governing body will also speak to Wigan regarding their safety arrangements for the match in a bid to establish how the pitch invasion was allowed to happen in the first place. Wigan will also be quizzed on the behaviour of their supporters; as well as the Aguero incident, a number of the club’s fans were seen approaching the away end and goading City supporters before police and stewards arrived on the scene.

City officials will also be questioned over the behaviour of their own supporters, after pictures suggested that an advertising hoarding was thrown from the away end at police officers.

The ugly scenes can be traced back to Fabian Delph’s first-half red card, which sparked a number of arguments and set the tone for the rest of the match. The red card incident itself will not be looked at again, however.

Referee Anthony Taylor’s decision to send off Delph prompted protests from City players and coach Pep Guardiola. Guardiola was involved in a touchline row with Wigan counterpart Paul Cook, before Aguero also got involved and needed to be pulled away from Cook as players jostled around them. 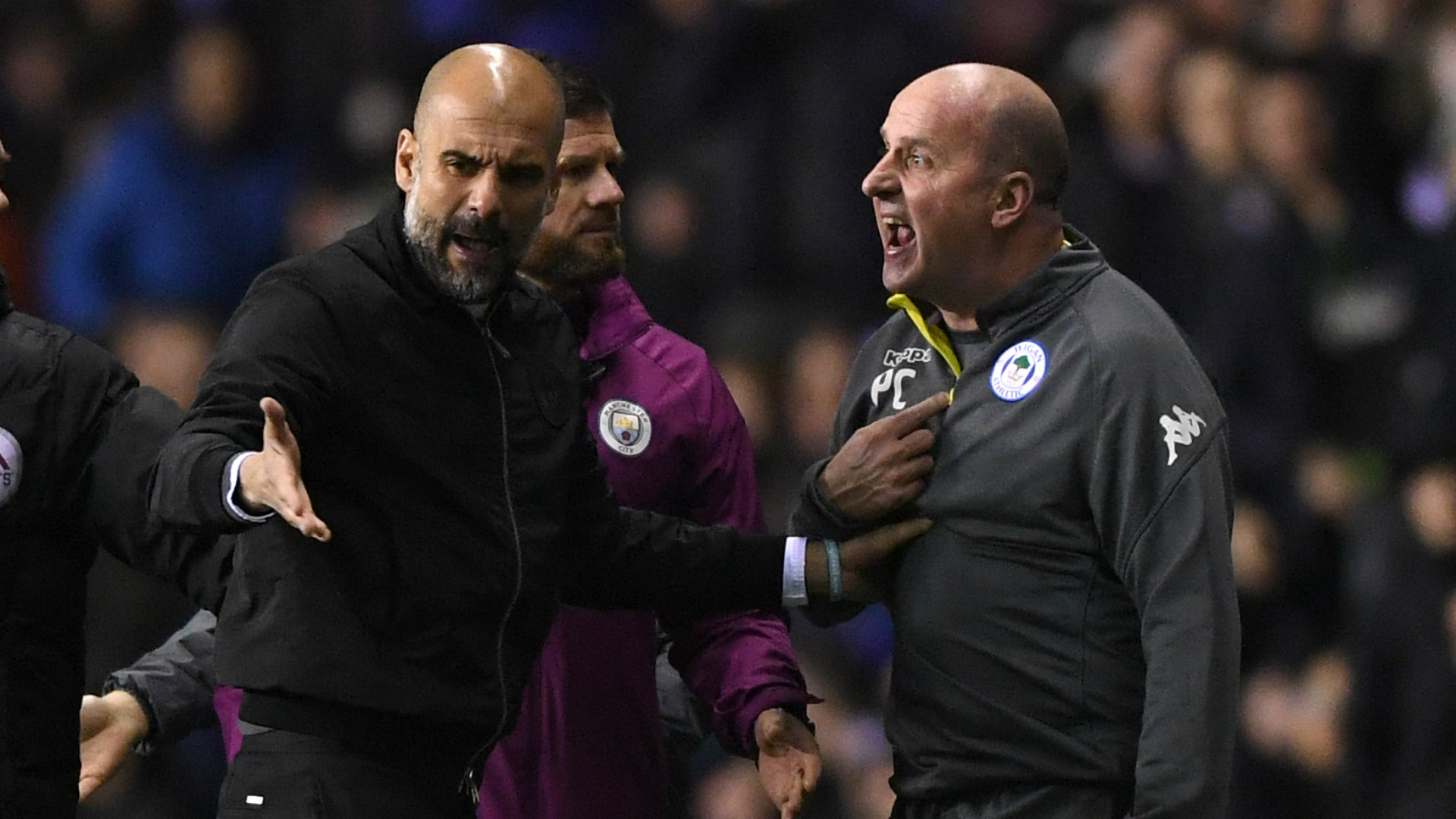 The argument spilled over into the tunnel at half-time, with television pictures showing Guardiola and Cook exchanged in a heated debate as they headed towards the dressing rooms.

Those pictures also suggested that Guardiola, following his row with Cook, raced towards the officials as they left the field of play, although the live feed was interrupted.

The FA has received Taylor’s match report and will study it as part of its investigation. Given the officials would not have seen the earlier row between Guardiola and Cook, the FA will also use the television footage obtained by the BBC, as well as asking the protagonists for their version of events.

Sources within the FA believe they will be in a position to decide whether to bring charges or not on Wednesday, once all footage has been studied and statements have been taken.

Goal reported on Monday night that City themselves will look to speak to Wigan about their safety arrangements, as they believe their players’ safety was put at risk.

Wigan confirmed on Tuesday that they will launch a full investigation into the pitch invasion.