From the resurgent Ander Herrera to the physical Marouane Fellaini, manager Louis van Gaal has plenty of in-form weapons to choose from at a time when City’s stars are struggling

Rarely in recent times will Manchester United have felt so well placed to defeat rivals City. The balance of power in this storied rivalry had shifted very much towards the blue half of Manchester since Sheikh Mansour purchased the club, winning six of the last seven league meetings and scoring 19 goals in the process. But, under Louis van Gaal, the Red Devils have started to rediscover their old swagger.

Only Arsenal can claim to be in better form than United at present, with the club all-but assured of a return to the Champions League having leapfrogged City in the process. Now it is Manuel Pellegrini, not Van Gaal, who is under pressure, and the two sides’ contrasting fortunes should make for an intriguing clash at Old Trafford. But where will Sunday’s contest be won and lost?… 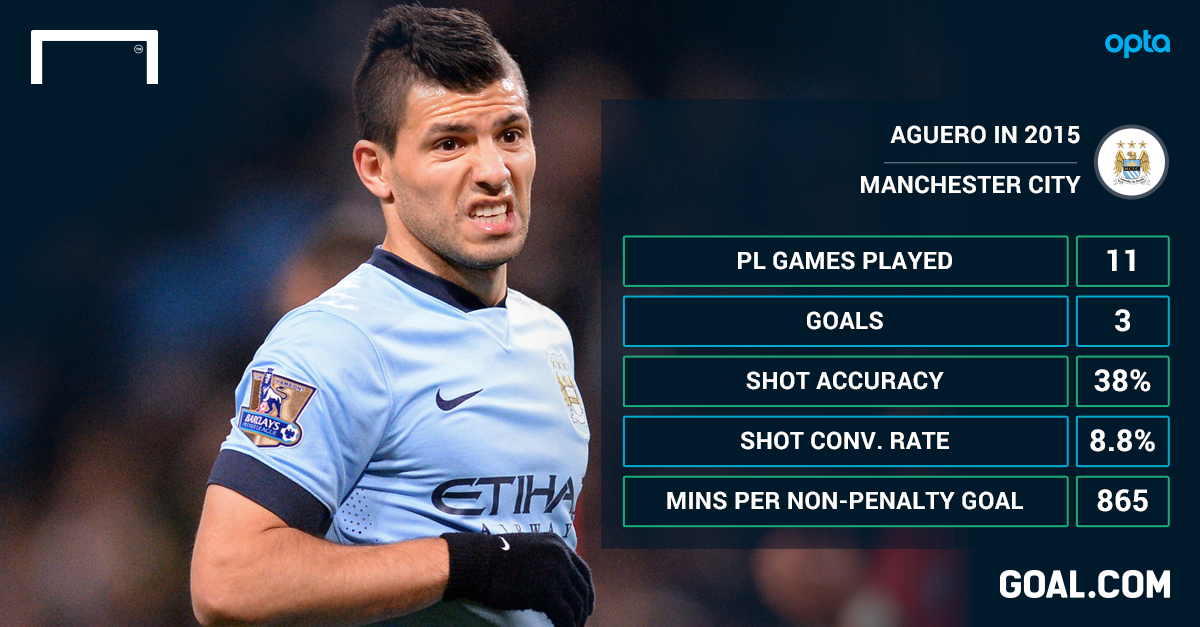 The fading of Manchester City’s title hopes has exactly coincided with the loss of form of Sergio Aguero. At the start of December, just before injuring knee ligaments, he had 14 league goals in as many games.

Since returning to the side in January, the Argentine has netted just once from open play (and twice more from the penalty spot – those goals coming against Stoke and Newcastle), with City winning a mere 36 per cent of matches in which he has featured since the turn of the year.

Of course, the entire team – not just Aguero – has struggled to maintain their title challenge in the second half of the season, with them having lost their balance and fluidity in attack and failing to adequately supply their diminutive frontman. He was presented with 17 big chances in the first four months of the season, but just five since.

Against Crystal Palace, meanwhile, he often found himself as the deepest of City’s attackers, collecting the ball from the centre-backs at times while Yaya Toure bombed forward. That the Ivorian had three times as many shots at Selhurst Park says much about the dysfunctional attack. Yet, Aguero’s pace – assuming City can supply him early – could be a real worry for an unconvincing United back-line and offers the Argentine a shot at reviving his goalscoring form. 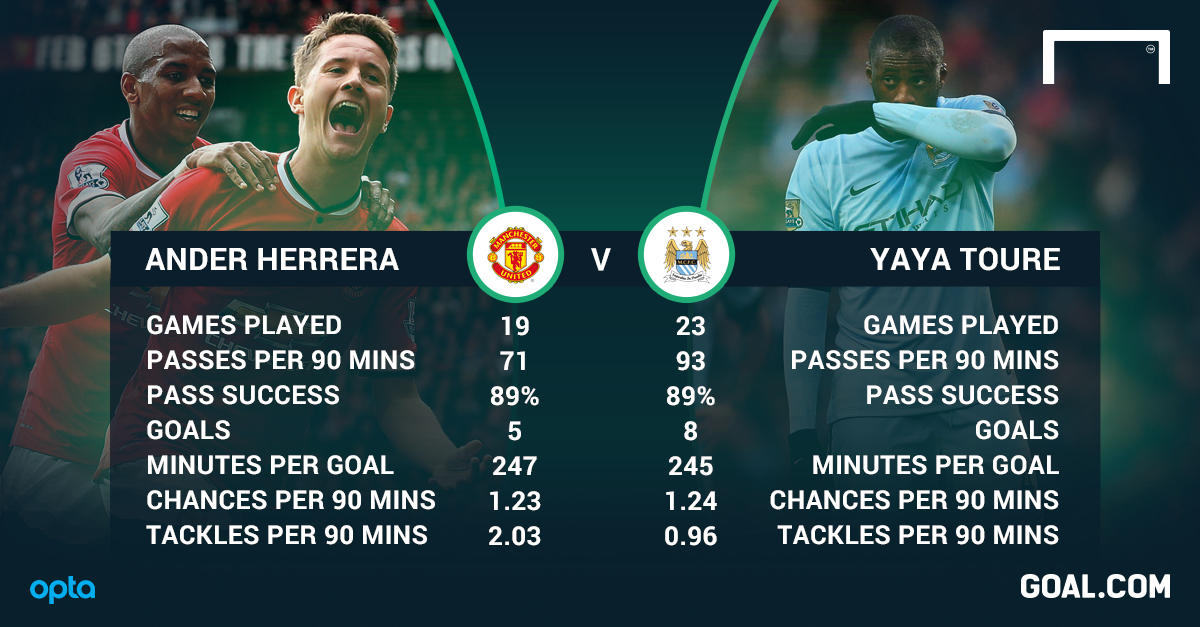 Manchester United might be breathing down Chelsea’s necks now had Ander Herrera been trusted more at the start of the season. The summer signing from Athletic was perceived to be the main culprit for a lack of balance in Van Gaal’s side and was dropped from the starting XI, but has returned to the team to establish himself as one of the Premier League’s most rounded midfielders.

Herrera has started the last six matches – his longest run in the side – with United winning all but one (an away trip to Swansea that the Spaniard netted in). He has married together tenacity – only Antonio Valencia has won more tackles among the squad – with the precision in possession that Van Gaal demands, finding his target with 96% of his 98 passes against Aston Villa.

Alongside Michael Carrick and Juan Mata, United have finally found their midfield rhythm; the trio are calm and cultured on the ball, creating triangles at every opportunity and starving opponents of possession. Sunday’s match with City will be their biggest test yet, though, pitting them against the only Premier League side to have averaged more possession or a higher pass completion rate.

Just as Herrera has hit top form, meanwhile, Yaya Toure has tailed off, and their duel could be crucial. The Ivorian often leaves Fernandinho isolated, neglecting defensive duties and amplifying the lack of a genuine ball-winner. If Herrera can offer Carrick the defensive support Toure shuns, while also bombing forward and overloading City’s lone midfield anchor, then the home side could dominate the midfield. 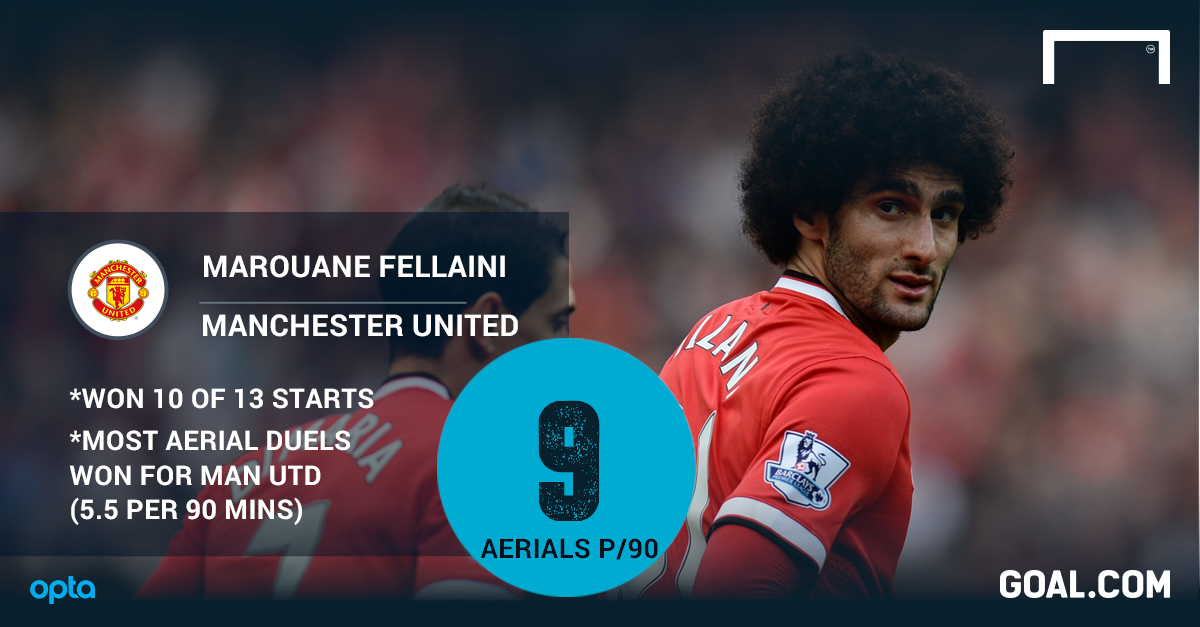 The full extent of Vincent Kompany’s regression was evident on Monday night as the City skipper was bullied by Glenn Murray. The Crystal Palace striker is certainly in form right now – to such an extent that he has the best strike rate in the Premier League – but few would have expected a player who was on loan at Reading just a few months ago to provide such a test for Kompany & Co.

Things will not get any easier, either, with Marouane Fellaini primed to repeat Murray’s trick. Both players are so-called “handfuls”, teaming their awkward strength with real power in the air. At Selhurst Park, Murray won 10 of his 15 aerial duels, beating Kompany with alarming ease, and Fellaini is just as effective in the air as the veteran Palace frontman.

United will have no qualms about going long either – only QPR have averaged more long balls (80 per game) than United (79) this season – and the tactic of Fellaini pulling onto full-backs has proven successful, particularly against Tottenham. For that reason, Bacary Sagna may remain at right-back given that he is, statistically, City’s strongest player in the air (winning 4.7 aerial duels per game compared to just 2.0 for Pablo Zabaleta).

Though United may not be able to exploit full-backs by launching the ball to Fellaini, City are still vulnerable through the middle. They have no midfielder capable of helping out the centre-backs by dropping off and picking up Fellaini – at least, not since Javi Garcia was sold, who averaged 3.8 successful aerial duels per 90 minutes last season, a tally bettered only by Edin Dzeko. 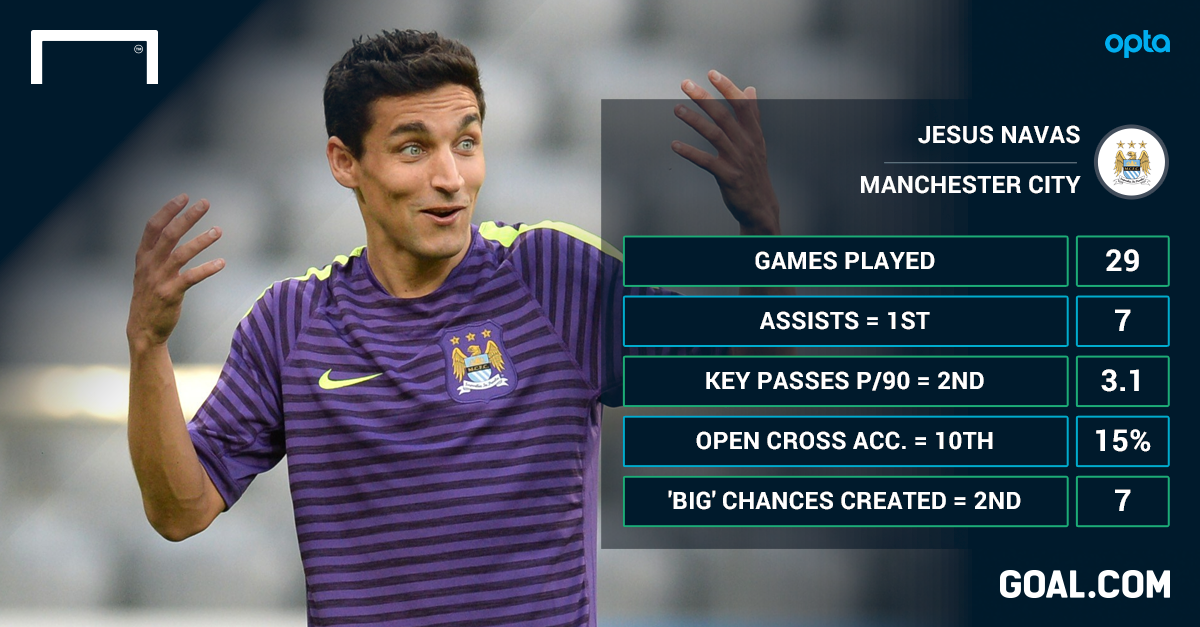 Not many people would guess that Jesus Navas has registered the most assists (7) of any Manchester City player this season – though that may not be such a good thing for the soon-to-be-dethroned champions. The Spanish winger is a curious player, creating chances only less regularly than David Silva yet so often frustrating and inconsistent, sending lame, trickling crosses into the box that rarely beat the first man.

That Navas ranks so highly among City’s creators says much about how poor the side have been – and how far adrift the club’s playmakers are compared to the rest of the division (and, namely, Cesc Fabregas, who has nine more assists than Navas).

Nevertheless, the former Sevilla wingman presents Pellegrini with something of a dilemma. On the one hand, he has been a rare bright spark, bringing speed and directness to a side that can be laborious on the ball. On the other, he has struggled to connect with Aguero and offers little of the defensive traits that will be needed to thwart United’s solid and adventurous left flank.

Most of City’s attacks in recent matches have come down their right flank (topping out at 52% against Liverpool, a match they lost) and Pellegrini may be tempted by either the pace of Navas or the cunning of Samir Nasri down the right. But two such attack-minded players could leave City vulnerable to the burgeoning understanding developing between Ashley Young and Daley Blind, with James Milner more capable of locking down that particular threat.