COMMENT: The Ivorian could be on his way out in the summer and his performance against Swansea provided a snapshot of just how impressive he has been in England

It has been an underwhelming campaign for Manchester City, whose title defence turned into the meekest of surrenders as Jose Mourinho’s relentless Chelsea machine effectively wrapped up the league many months ago.

James Milner, Joe Hart and David Silva provided moments of quality at the Liberty Stadium but, not for the first time, it was Yaya Toure who was City’s match-winner. The midfielder got the first and fifth goals of the game, coming up trumps when his side needed him most.

On a weekend which has seen the impending departure of one of the all-time great Premier League central midfielders met with tributes from far and wide, the probable exit of another has largely gone under the radar. Steven Gerrard’s contributions to his boyhood club Liverpool over a 17-year career outweigh those of Toure’s to City for sheer longevity, but the 32-year-old has made just as much of an impact on his side’s fortunes over the past few years.

Toure proved as much at the Liberty Stadium, running the show against a side who have impressed all onlookers this season. The Ivorian has been criticised at times this campaign – particularly in the aftermath to City’s two-legged aggregate defeat to Barcelona in the Champions League – but he has remained one of his club’s most important players.

Toure has scored 51 goals in 162 Premier League appearances, a remarkable return for a player who also contributes so much else. He has recorded 25 assists in that time and created 208 goalscoring chances. His passing accuracy stands at 89 percent, while only three of his showings have come from the substitute’s bench, showing how integral he has been to both Roberto Mancini and Manuel Pellegrini.

City’s No.42 is primarily praised for his pace and power but, while those attributes are in no doubt, he is also a supremely gifted technical footballer. His all-round play as well as his goals demonstrated that in Wales on Sunday, some superb touches and neat passes evidence of an incredibly talented player who has far more to his armoury than brute force.

At first glance, it is perhaps surprising – given how central he has been to City’s greatest moments over the last few seasons – that Toure is almost certain to depart this summer. His agent, the voluble Dimitri Seluk to whom Toure owes much of the blame for the sometimes negative perception of him on English shores, recently claimed the chances of him leaving the northwest were as high as 90 per cent.

Former City and current Inter boss Mancini has not made any secret of his desire to bring the midfielder to San Siro, and the drastic need for an overhaul of the playing staff in the blue half of Manchester City means high-earners like Toure are vulnerable to being moved on so vital funds can be freed up in the club’s wage budget.

Goal understands that Toure, Edin Dzeko and Samir Nasri head the list of those likely to leave and, for someone on £220,000 (€302,000) per week who will turn 33 next season, it makes sense that Toure is among those shipped out.

If he is to seek pastures new, it is to be hoped that the pivotal role he has played in leading City’s evolution is duly recognised. There have been few players better than the midfielder in his five seasons in England. Even now, he remains one of City’s key players and a chief go-to men when they are in need of being dug out of trouble. 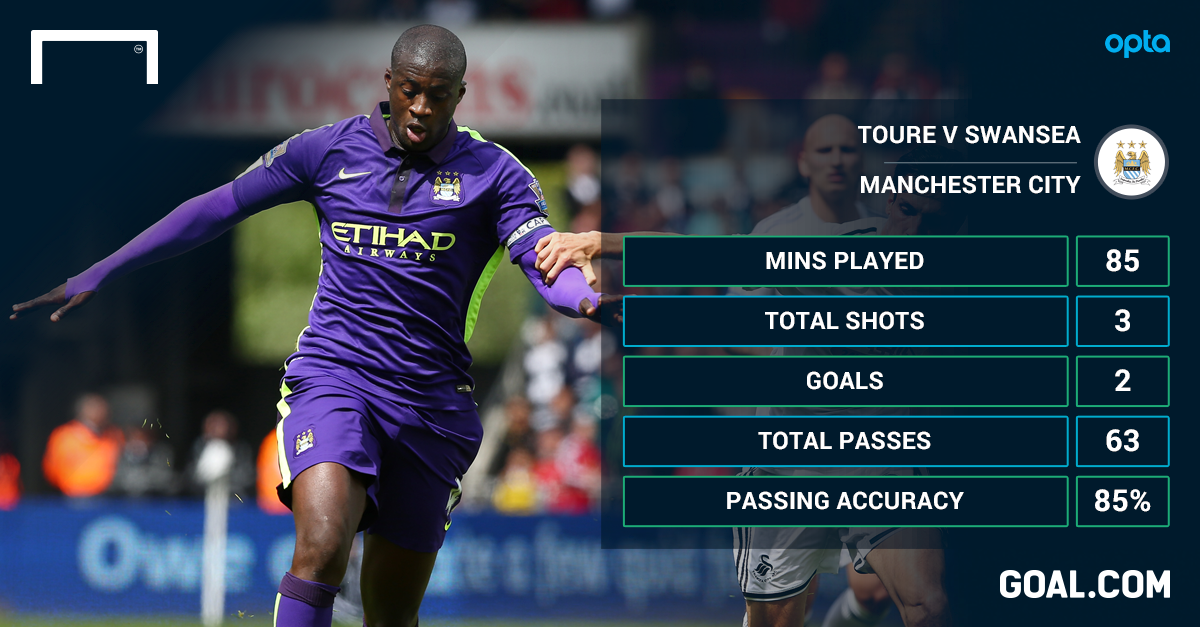 There were shaky moments for City in south Wales but teams of their ilk have so much quality that a game can be changed in an instant, patterns of play destroyed with a single piece of magic from a top-class opponent. Toure has hit better strikes than the one that required a deflection off Ashley Williams to open the scoring, but it was a sign that players like him have the ability to turn a match on its head with no prior warning. Even at 32, he’s still a game changer.

His second was more emphatic, Jack Cork brushed off with ease before a stinging shot was fired past Lukasz Fabianski at his near post. It was the goal that won the game for City, even if Joe Hart deserves huge credit for a world-class save from Federico Fernandez late on.

Whatever happens this summer, Toure has undeniably played a starring role in Manchester City’s coming of age and the club entering English football’s elite. He was essential in City’s two title wins, and probably would have won the Player of the Year award just last year had it not been for Luis Suarez’s otherworldly excellence.

Gerrard was rightly lauded with praise following his final Liverpool appearance at Anfield on Saturday. His commitment and loyalty to one club has been admirable, and he will go down as one of the Premier League’s best midfielders.

But Yaya Toure is another who deserves his place in the pantheon of the greatest players in his position over the last 25 years. There will be no guards of honour or farewell speeches when the Ivorian takes to the Etihad Stadium field for what looks set to be the final time against Southampton next Sunday, but City fans will presumably will be keen to express their appreciation.

Their club is in a much stronger position than it was when Toure joined five years ago and his role in their transformation should never be forgotten.