On the night when Raheem Sterling made his competitive debut, it was the old guard who left Manuel Pellegrini optimistic of a better season than the last

On an opening weekend bereft of quality from any of the Premier League title contenders, Manchester City provided the kind of performance potential champions dream of replicating week on week.

Central to that performance, among others, was Yaya Toure.

Manchester United laboured to victory against Tottenham, Chelsea could only draw at home against Swansea City, and Arsenal were handed a reality check by West Ham after a summer of optimism.

Toure, David Silva and Co. meanwhile would not fall victim to the complacency which hampered the rest of the prospective top four against West Brom on Monday night.

Though they eventually rallied to finish second behind Chelsea last season, Manuel Pellegrini’s side were a shadow of their former selves in relinquishing their title. Drab performance followed drab performance, and were it not for Sergio Aguero’s goals they may have struggled to even finish in the top four.

Toure struggled as his future at the club remained in doubt for long periods, while Vincent Kompany provided hints that his time as one of the world’s outstanding defenders was coming to an end. Pellegrini’s own situation did not help matters as the spectre of Pep Guardiola hung over the Etihad Stadium for much of the campaign.

But with Pellegrini having extended his contract until 2017, there is all of a sudden more stability around City despite the deal likely being a smokescreen to shield the Chilean from criticism before Guardiola inevitably arrives in the summer.

This was reflected in their performance against West Brom as they took control early on before picking the Baggies off at will. On a night when £49 million man Raheem Sterling made his competitive debut, it was somewhat symbolic that Toure and Kompany provided the goals. 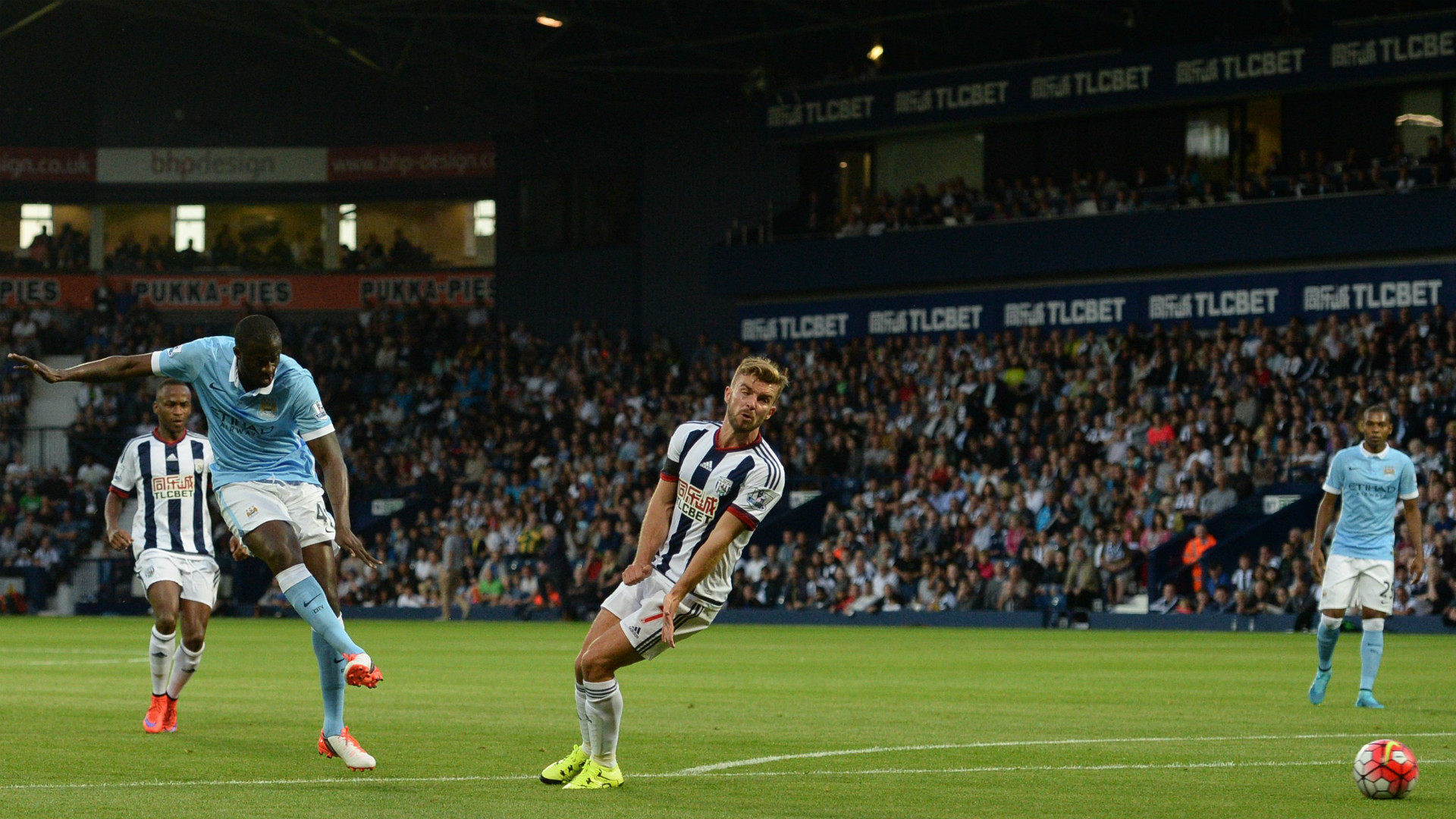 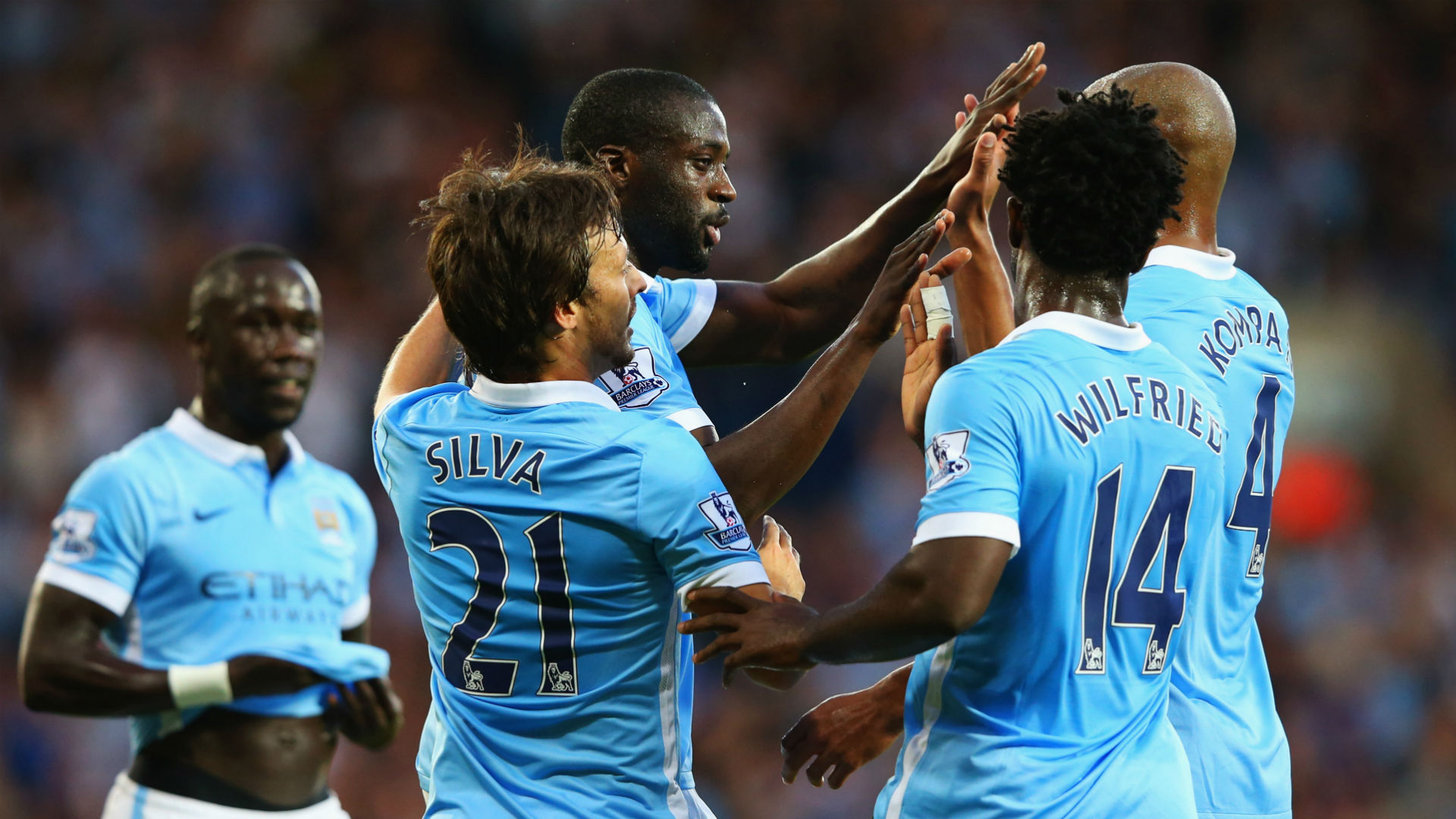 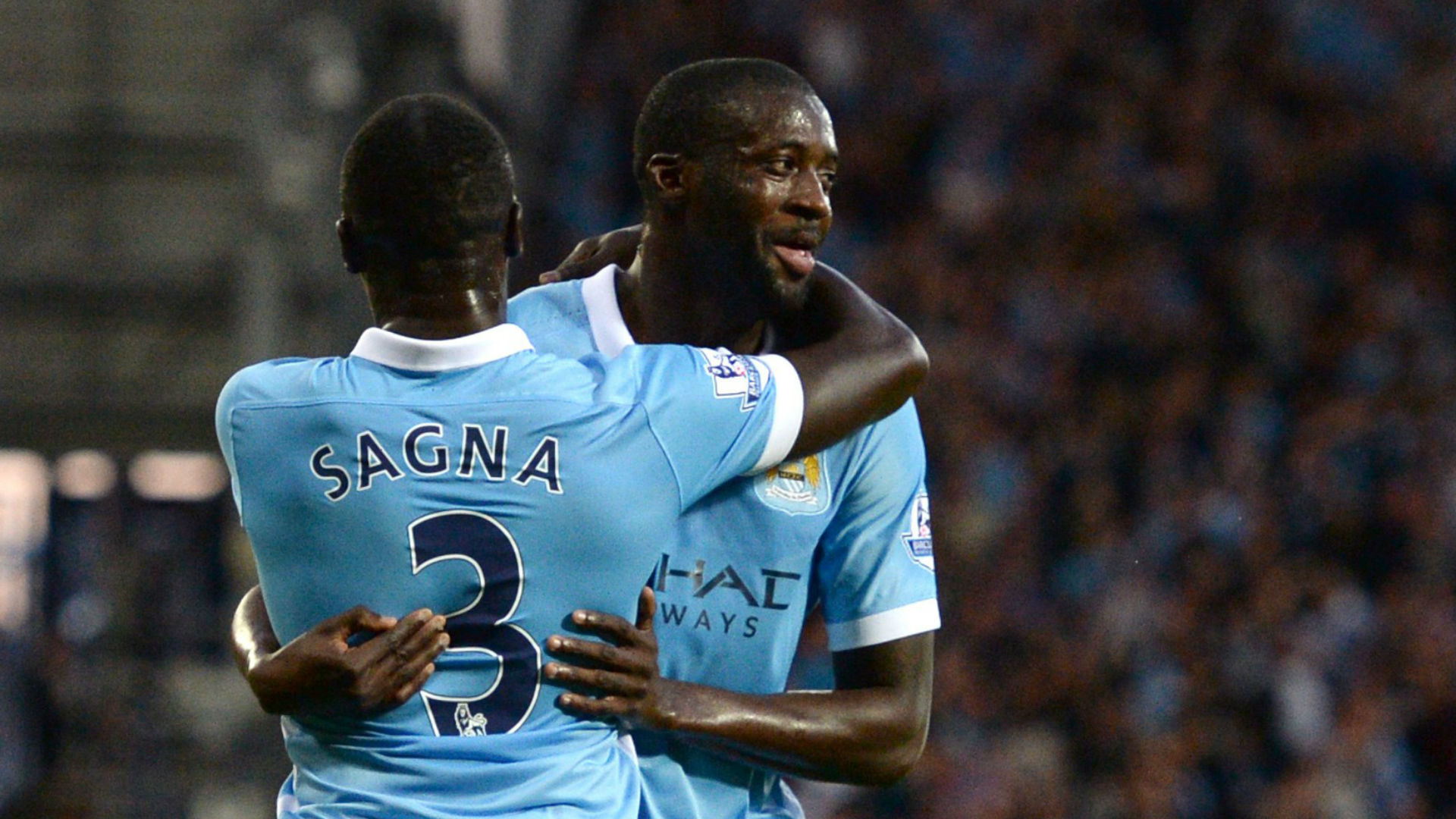 The pair – along with Sergio Aguero and Silva – were the driving force behind City’s title triumph in 2014, and if Pellegrini’s side are to replicate that feat they will need them firing once again. All four will need to be at their best again if Chelsea and the rest are to be toppled come May.

At The Hawthorns, it was Silva who put in the outstanding performance of the night as he showcased why he remains the best player around the edge of the box the Premier League has to offer.

It defies belief that Pellegrini insisted on playing him wide on the left as part of a 4-4-2 system for so long. Clearly more at home as a No.10, the Spaniard now has the chance to stamp his authority on this season as Eden Hazard did the last. 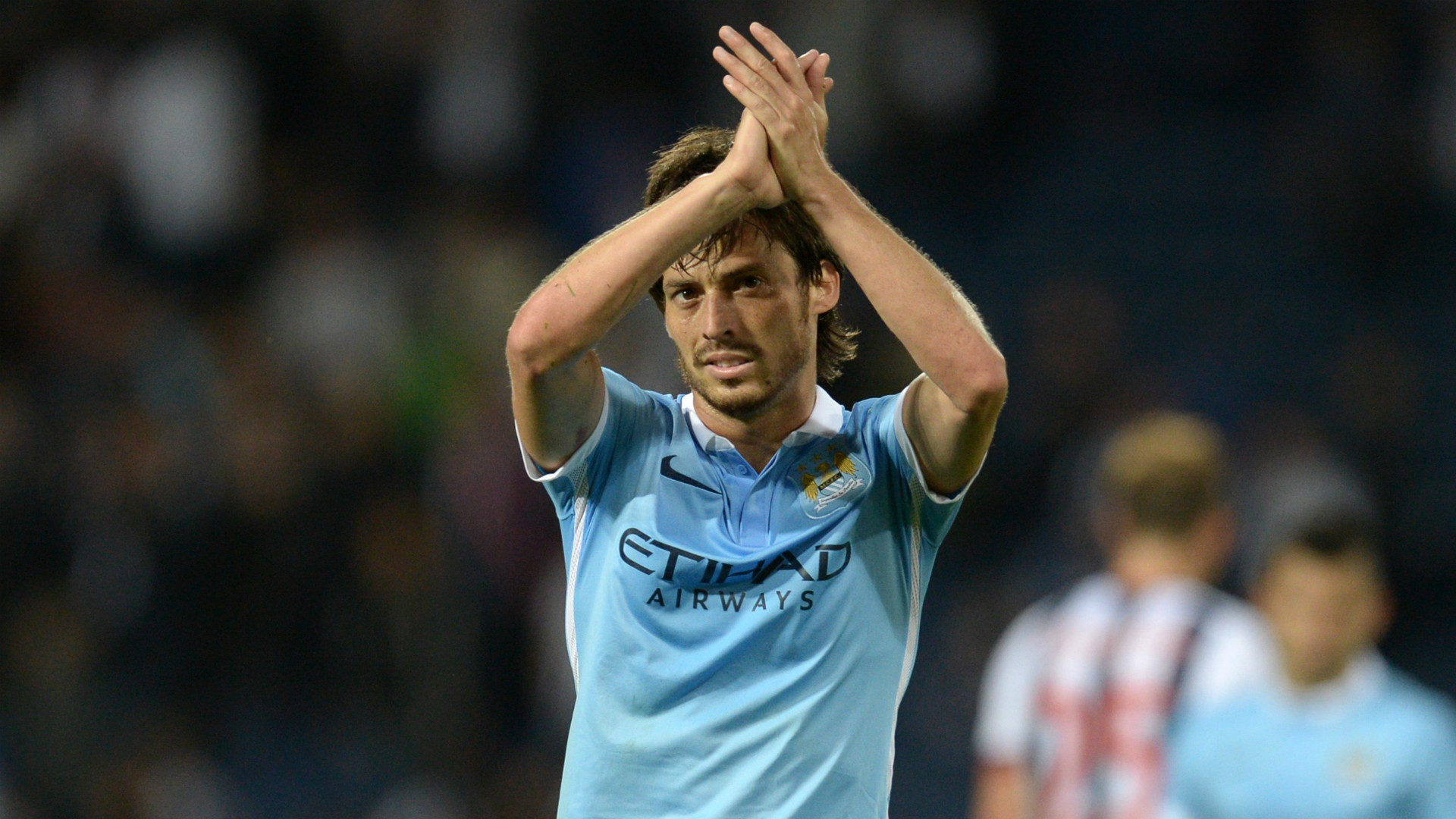 Behind Silva, Toure too was in his more natural role as a roaming central midfielder. Too often he was tied to defensive duties last term, but against West Brom he was given the freedom to get forward thanks to a quietly outstanding performance from Fernandinho alongside him.

Birthday-cake-gate seems to be behind the Ivorian and his second goal – a superb curling effort from 20 yards following neat interplay with compatriot Wilfried Bony – was a sign that his confidence is returning.

Few midfielders in the English top flight possess the talent the Ivorian has, and his physical presence just adds to the task defenders face in stopping him. An in-form Toure can be the difference for City, and Pellegrini is well aware of how key it is he puts his issues from last season behind him.

“I always say that last season was strange for Yaya,” he said. He started the season with a lot of problems after the death of his brother and afterwards problems with his agent. I think that he was not focused on what he wanted to do last year. Now, I am sure we are going to see the same Yaya that we saw two seasons ago.

“I don’t think Yaya deserved the amount of criticism that he received last season. Maybe it was not his best season but he didn’t play as badly as everyone said. He’s an important player for us and I’m sure his head was not it in its best moment.”

Toure’s fellow goalscorer Kompany perhaps had an even more chastening time in 2014-15. A string of errors led to the club captain being forced to watch from the bench for the final six matches of the campaign – all of which City won – and many questioned whether fellow Belgium international Jason Denayer should be given the opportunity to step into Kompany’s shoes.

Dealing with the little threat Saido Berahino and Rickie Lambert posed does not give the best indicator that his issues are behind him, but the confidence he showed to head Silva’s second-half corner past Boaz Myhill at his near post suggested a change in fortunes may be on the horizon. This was his first goal since the final game of the 2013-14 season and helped his team to a first victory with him in the XI since the Baggies were beaten by the same scoreline on March 21. 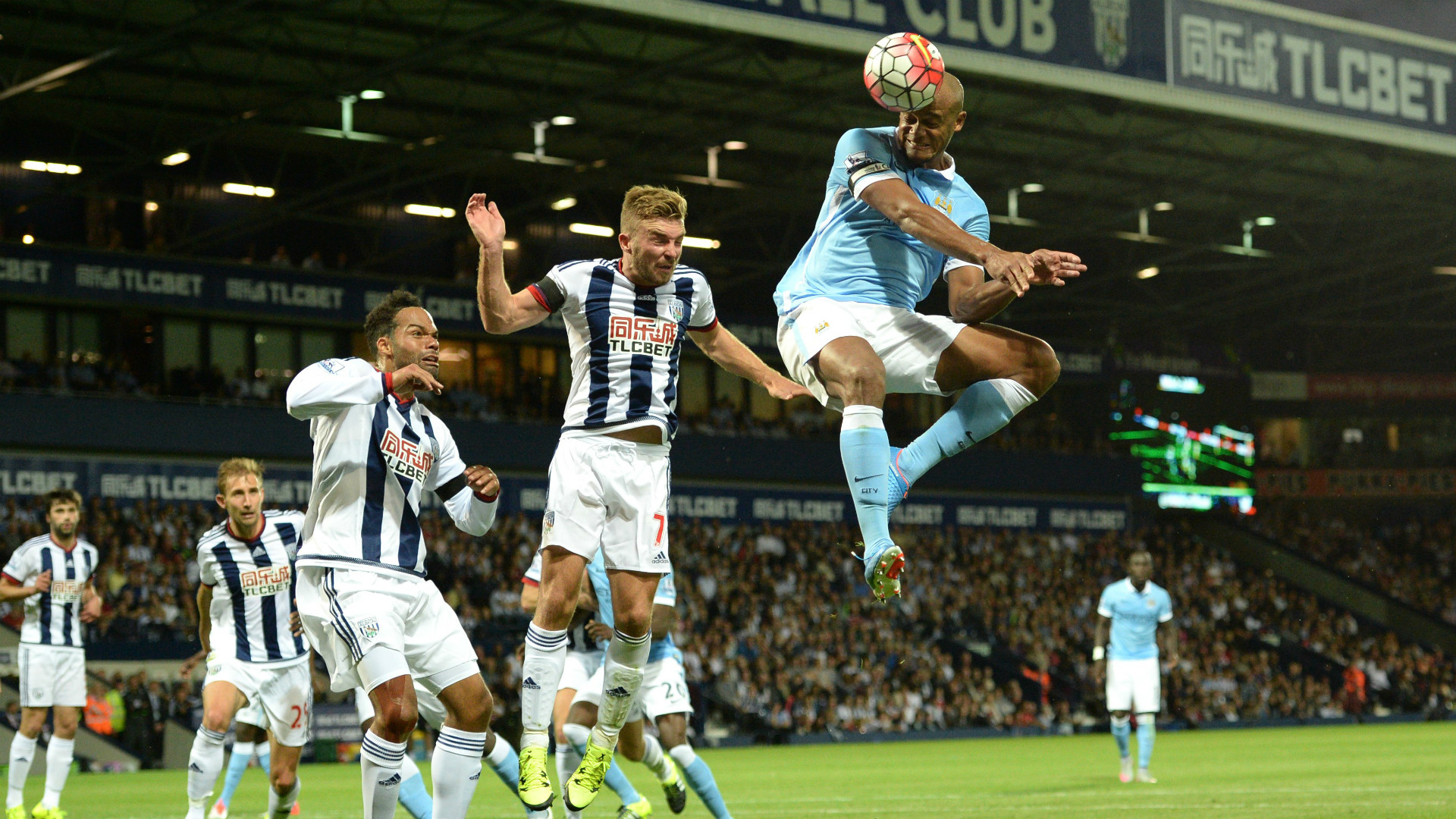 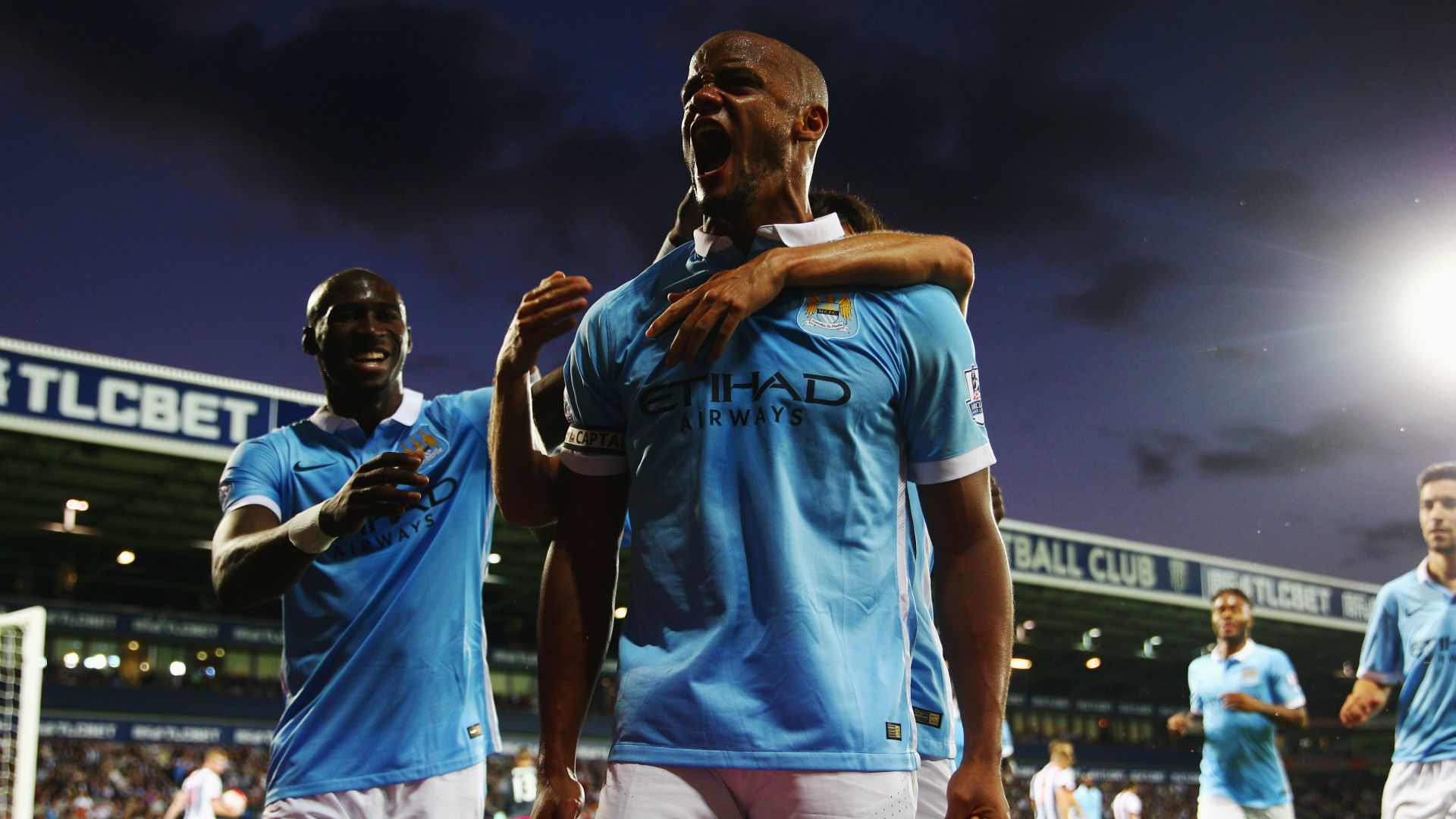 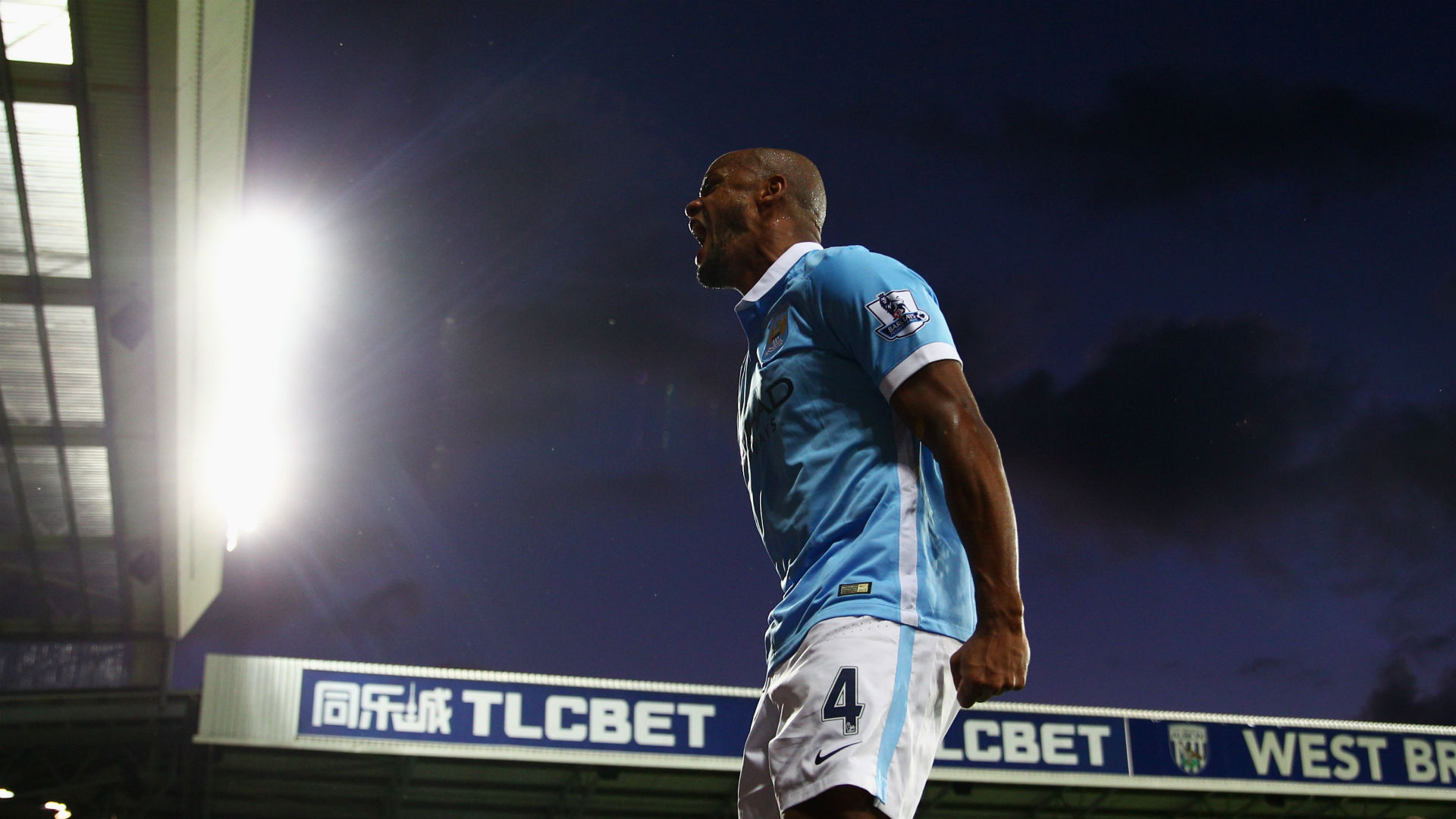 While it was the old guard that impressed most, all eyes prior to kick-off were on Sterling as he returned to Premier League action following his £49m move from Liverpool.

In 70 minutes on the left-hand side the England international showed flashes of the player that many at Anfield admired before his far from acrimonious exit, though he really should have scored as Boaz Myhill saved twice from the winger either side of half-time.

The image of Sterling walking into the stands to hand his shirt to a supporter at full-time smacked of a player desperate to improve his public image, but should he improve on this display many outside of Merseyside will soon forget the whole sorry saga.

Kevin De Bruyne could well join him and Silva in a mouthwatering attacking trio behind the fit-again Aguero after a £46m bid was lodged for the Wolfsburg man, and with the Belgian on board Pellegrini would have a formidable squad able of competing both at home and in Europe.

For now, however, attention turns to the visit of Chelsea on Sunday. An eighth straight Premier League win would leave the Blues already five points clear of their primary title rivals and in pole position – albeit at an early stage – to become the sixth straight team to lift the trophy having begun their campaign on a Monday night.

On this evidence, Mourinho will have to come up with something special to stop them.