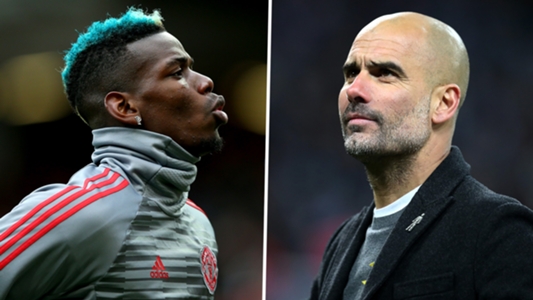 Pep Guardiola has claimed that Paul Pogba and Henrikh Mkhitaryan were offered to Manchester City by Mino Raiola in January as the Catalan hit back at the super-agent in sensational fashion.

Raiola had branded Guardiola a “dog” and a “coward” following Zlatan Ibrahimovic’s move from Manchester United to LA Galaxy at the end of March, harking back to the Catalan’s treatment of the Sweden striker during their time together at Barcelona.

Ahead of Saturday’s Manchester derby, Guardiola insisted that United boss Jose Mourinho is not his only rival: “I have many…..especially agents. I have a lot.”

When asked specifically about Raiola and his insults, the City boss took his opportunity to fire back.

Pogba’s relationship with Mourinho has been the subject of much speculation in recent weeks, with claims that the Frenchman even wants to leave Old Trafford, and Guardiola now says he was offered the midfielder’s services during the January transfer window, as well as those of Mkhitaryan, who eventually joined Arsenal.

“I will answer another day, today before the game I will not,” he said initially, before changing his mind.

“I could answer him. I have a question, yeah, I will answer him, come on. Okay.

“I never speak with him, so I don’t know maybe Ibra explained many things about me. But, two months ago he offered me Mkhitaryan and Pogba to play with us. Why?

“Why he offer? He was interested in Mkhitaryan and Pogba to play with us? So I’m like a guy, so he has to protect his players and he has to know so he cannot bring the players to a guy like me, like a dog. And comparing a dog is bad. It’s not good. He has to respect the dogs.”

Asked about his response to Raiola’s offer, Guardiola replied: “I said no. We don’t have the money enough to buy Pogba because he is so expensive.”

The City boss was then asked if he was surprised to be offered a high-profile Manchester United player.